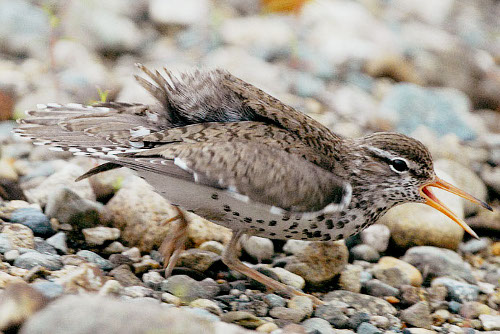 Characteristics and Range With its ventrally-spotted breeding plumage, bobbing and teetering motion along the water's edge, and stiff-winged, stuttering wing-beats, the Spotted Sandpiper is easily recognized. It is the most widespread breeding sandpiper in North America and also across British Columbia, and can be found on a wide variety of marine and freshwater shorelines. A closely-related sister species, the Common Sandpiper (Actitis hypoleucos), fills a similar ecological niche in Eurasia. Unlike most birds, female Spotted Sandpipers are larger than males and take the leading role in breeding: they arrive at breeding grounds before the males, defend territories, attract males with displays and will sometimes mate with more than one male in a season (Reed et al. 2013).

Breeding occurs across much of North America, from the arctic treeline to the southern United States (Reed et al. 2013). Spotted Sandpipers tend to migrate south of the breeding range (although a few remain in breeding areas) to winter across a huge range from the southern United States through Central America, much of South America and islands in the West Indies, Bahamas and Galapagos. It is widespread and fairly common as a breeder and migrant in British Columbia, and a few sometimes overwinter around the shores of the Salish Sea (Campbell et al. 1990).

Distribution, Abundance, and Habitat There is evidence of breeding throughout most of British Columbia, with concentrations in the southern third of the province, the central plateau and the Boreal Plains ecoregion. Campbell et al. (1990) show a similar breeding distribution and there is no evidence of major changes since the 1980s. As an indication of the species adaptability and generalized habitat use, atlassing reports breeding from sea level to above 2,100 m and spread fairly uniformly across numerous biogeoclimatic zones. The Probability of Observation and abundance based on point count data are fairly uniform across the province, except for low values in the highest mountain areas and in parts of the coastal islands.

The Spotted Sandpiper nests along marine and freshwater shores in a wide variety of habitats. Key requisites for nesting territories appear to be shoreline (for foraging, drinking, bathing and displaying), semi-open habitat for nesting and patches of dense vegetation for brood cover (Reed et al. 2013). Areas safe from predators, such as wide open beach areas or islands in lakes, rivers or ocean, are often preferred. The nest is a cup or hollow lined with grass and other material, typically next to or under shading vegetation and within 100 m of the water's edge (Campbell et al. 1990, Reed et al. 2013).

Conservation and Recommendations Different population indicators give highly variable and sometimes contradictory numbers and trends. The global population is considered to be stable at around 660,000 birds (Andres et al. 2012). However, the Breeding Bird Survey suggests that Spotted Sandpiper numbers have decreased since 1970 across much of the range, including parts of Canada, although it appears stable in British Columbia; the cause of this decline is not known (Environment Canada 2011, Reed et al. 2013). With data from hundreds of locations, the 2008-2012 Atlas provides a strong quantitative baseline to track future changes in the distribution and abundance of Spotted Sandpiper in the province.