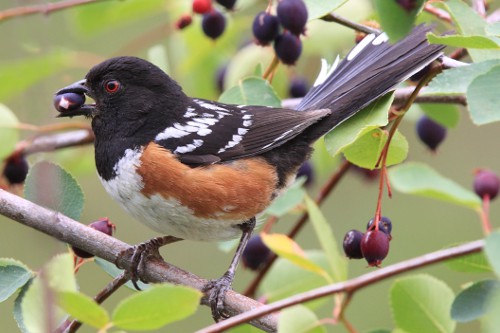 Characteristics and Range This large handsome sparrow with rusty flanks, long tail, and cat-like call is a well-known presence in gardens and parks, especially on the south coast in winter when it is commonly seen at feeders or foraging on the ground alongside its smaller relatives. In summer, its breeding range extends throughout the mountains of western North America from southern British Columbia to the uplands of Central America and includes the southernmost parts of the Canadian Prairies and the western margin of the United States Great Plains (Greenlaw 1996).

Distribution, Abundance, and Habitat The Spotted Towhee breeds across the southern third of the province, south of 52°N. Comparison of the Atlas results with The Birds of British Columbia suggest that the summer range of this species has changed little over the past 14 years. The Atlas filled gaps in distribution in parts of the southern interior, e.g., along the Fraser River, and around Shuswap Lake; these pockets of denser records may simply reflect the systematic collection of Atlas data for a fairly common species.

Probability of Observation varies with elevation. The Spotted Towhee is most likely to be found below 250 m in major valleys, and least likely to be found on the intervening uplands. It is most abundant in the Georgia Depression Ecoprovince, as noted in The Birds of British Columbia and confirmed by Atlas point count data which show that abundance here is twice as high as in any other ecoprovince. Upper limits of the towhee's breeding range rise gradually eastward from 700 m near the coast to about 1,250 m in the interior, perhaps reflecting the gradual eastward rise of timberline and spring snowline. Precise upper elevation limits for Spotted Towhee are difficult to establish with certainty due to potential confusion with Hermit Thrush, which gives a very similar, cat-like mewing call. Reports of calling towhees above 1,500 m can almost certainly be attributed to this high-elevation thrush.

This species nests on the ground in dense shrubbery and thickets associated with forest edges, including clear-cuts and regenerating forest, as well as hedgerows and brushy patches in agricultural areas, parks and suburban gardens. On the coast, it is much more common in the Coastal Douglas-fir than the Coastal Western Hemlock biogeoclimatic zone. In the interior, this species prefers the Interior Douglas-fir and Interior Cedar-Hemlock biogeoclimatic zones, and Ponderosa Pine parkland in which it likely selects the narrow riparian thickets that follow gullies and small watercourses across dry hillsides.

Conservation and Recommendations Trends in the Spotted Towhee population are relatively stable, and are well captured by Breeding Bird Survey and Christmas Bird Count monitoring efforts. This species' conservation status was reassessed from unknown to provincially secure in 2010, in part due to new information from the Atlas.