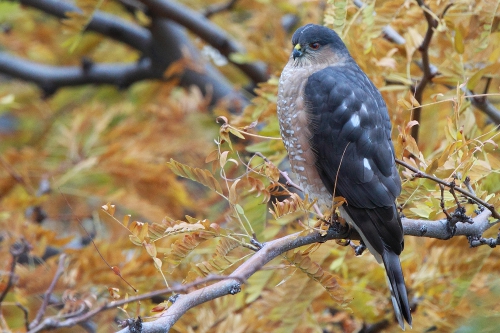 Characteristics and Range The Sharp-shinned Hawk, or "Sharpy" as many birders refer to it, is the smallest of the North American hawks, and exhibits the most extreme sexual dimorphism of all of the continent's raptors. On average, the males are little more than half the size of the females (Bildstein and Meyer 2000). The species breeds across the Boreal Forest from Pacific to Atlantic coasts, and south in forested hill and mountain ranges to Mexico's Sierra Madre. It is a medium- to long-distance migrant, wintering in lowlands and across the southern two-thirds of North America into Central America. Sharp-shinned Hawks are very inconspicuous when breeding; they are more frequently seen on migration when individuals congregate along traditional migratory corridors, which in British Columbia include mountain ridgelines and coastal promontories.

Distribution, Abundance, and Habitat The Sharp-shinned Hawk is widespread across the entire province during the breeding season, but confirmed and even probable evidence of breeding is rather scant because of the bird's inconspicuous behaviour and more remote, least disturbed habitat choice. The distribution has not changed since The Birds of British Columbia was published in 1990, but the Atlas did confirm breeding on Haida Gwaii, perhaps for the first time.

The species is nowhere numerous in British Columbia. The Probability of Observation model suggests it is more likely to be encountered in the Boreal-Taiga Plains, and Northern Rocky Mountain Trench from the Interior Plateau to the Liard River catchment, than elsewhere. Too few data were collected to draw any conclusions on abundance.

It chooses extensive stands of deciduous, mixed and coniferous forest to nest in, often close to water, and across a wide elevation range, breeding at lower elevations in coastal regions than in the interior (Campbell et al. 1990). Breeding is usually timed to coincide with the peak abundance of songbirds, the Sharp-shinned Hawk's primary prey (Bildstein and Meyer 2000).

Conservation and Recommendations There are no conservation concerns for this raptor, which has rebounded from organochlorine pesticide-driven declines in the early-mid 20th Century, and undergone large population increases since the 1970s based on Breeding Bird Survey and Christmas Bird Count data (Environment Canada 2011).