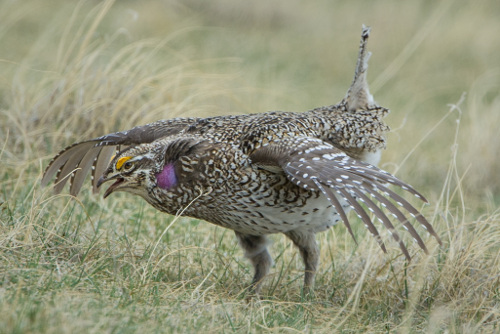 Characteristics and Range The Sharp-tailed Grouse is a cryptically coloured, medium-sized game bird with yellowish combs over its eyes, best known for the elaborate dancing displays of the males. It is the only extant grouse species in British Columbia that exhibits lekking behaviour. During the breeding season, males gather together at traditional locations (leks) where they attempt to attract mates by performing a foot-stomping, dance display while inflating the purple air sacs on either side of their throats. It is found only in North America, where it is resident in and around suitable open breeding habitat in the northwest boreal forest south through the Prairie, Great Lakes and Great Basin regions. It now occupies a much reduced range compared to the early 1900s (Connelly et al. 1998).

Distribution, Abundance, and Habitat Three of the seven subspecies occur in the province: the Alaskan subspecies (T. p. caurus) in the northwest corner of the Northern Boreal Mountains Ecoprovince around Tagish Lake; the Plains subspecies (T. p. jamesi) in the Boreal Plains Ecoprovince; and the Columbian subspecies (T. p. columbianus) in the Sub-Boreal Interior, Central and Southern Interior ecoprovinces (Leupin 2003). The Sharp-tailed Grouse also occurs in the Fort Nelson River catchment of the Taiga Plains Ecoprovince, but it is not known which subspecies occurs there. Historically, the Columbian subspecies was more widespread, but many populations are now believed extirpated; reports in the East Kootenays in the mid-2000s suggest that remnants remain, or re-colonisation may have occurred from the United States (Leupin and Chutter 2007). The Atlas found breeding evidence in all of these areas except the Northern Boreal Mountains and Southern Interior Mountains ecoprovinces.

Even within known areas of occurrence, Probabilities of Observation are low, reflecting the localised, patchy nature of its distribution, and early breeding season timing of lekking when Sharp-tailed Grouse are most conspicuous but fewer atlassers were conducting surveys. Based on provincial survey data, Leupin and Chutter (2007) estimated the Columbian subspecies population in British Columbia to be between 8,500 and 14,000 birds; the population sizes of the northern subspecies are unknown (Leupin 2003).

The Sharp-tailed Grouse uses open areas juxtaposed with shrubby areas and/or parkland. In the Southern Interior Ecoprovince, this is provided mostly by grassland habitats in the Bunchgrass biogeoclimatic zone. In some areas, especially in the Central Interior Ecoprovince, they have adapted well to ephemeral cut-over habitat. In the boreal forests of northern British Columbia, aspen parklands, swamps, meadows and burns are preferred. Leks occur in very open, short-grass habitats, while nests are placed on the ground in surrounding areas with more cover.

Conservation and Recommendations Neither the species nor any subspecies is considered at risk in Canada, and the proportion of the global population in British Columbia is very small (Partners in Flight Science Committee 2013). In British Columbia, the species as a whole is considered not at risk (British Columbia Ministry of Environment 2014). However, the Columbian subspecies is Blue-listed due to declining populations across its range and regional extirpations in southern British Columbia likely caused by loss and fragmentation of grassland habitat (Leupin and Chutter 2007). Whilst some habitat loss has occurred in British Columbia, the majority has occurred in the United States, reducing Sharp-tailed Grouse to 10% of its former range, such that British Columbia now holds one of the largest remaining populations of the Columbian subspecies. The province has contributed birds from ephemeral cut-over habitats to recovery efforts in the United States.

It is recommended to continue and expand existing British Columbia Wildlife Branch lek surveys to include potential additional areas identified by the Atlas project, and to initiate research to identify the subspecies occurring in the Fort Nelson River catchment area.