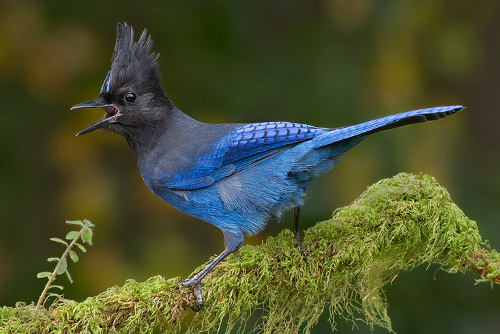 Characteristics and Range Bold, talkative and aquiver with restless energy, the vibrantly-coloured Steller's Jay is a beloved guest of backyards across the forested regions of British Columbia, and in 1987 it was designated as our official provincial bird. It is a resident and altitudinal migrant in North America's western cordilleras from Alaska south to Central America. It was first described in 1741 by celebrated Russian naturalist Georg Steller, who, on landing near present-day Cordova, Alaska, recognized its similarities to paintings of the Blue Jay, and surmised that their voyage had reached North America. Like other members of the corvid family, Steller's Jays are inquisitive and intelligent, with complex dominance hierarchies that remain poorly understood (Walker et al. 2014). Four of the 17 subspecies occur in British Columbia: three on the coast, including C. s. carlottae, which is endemic to Haida Gwaii, and C. s. annectens of the interior, distinguished from coastal subspecies by its conspicuous white eyebrows.

Distribution, Abundance, and Habitat The Steller's Jay is widespread in coastal, southern and central parts of British Columbia north to the Sub-Boreal Interior Ecoprovince, but largely absent across the drier interior plateaus and northern regions. There have been no real changes in distribution since The Birds of British Columbia was published in 1997.

Probability of Observation and point count data show the main centre of abundance is in the Coast and Mountains and Georgia Depression ecoprovinces, consistent with Campbell et al. (1997), who identified the Georgia Depression and western Vancouver Island as supporting the highest numbers. The species is less common elsewhere, including in the Southern Interior Mountains Ecoprovince where PObs values are also high. Steller's Jays occur across a wide elevation range, but are more abundant at lower elevations.

The Steller's Jay is a bird of coniferous and mixed coniferous-deciduous forests. On the British Columbian coast it is most abundant below 250 m in the Coastal Western Hemlock biogeoclimatic zone and in the interior it is most numerous at low to mid elevations in the Interior Cedar-Hemlock biogeoclimatic zone. In general Steller's Jays are associated with patchy or fragmented forest, and have been shown to benefit from forest fires and selective timber harvesting (Walker et al. 2014).

Conservation and Recommendations This is not a species of conservation concern and Breeding Bird Survey data suggest that populations have actually increased since the 1970's. As a versatile generalist found in a wide variety of habitats and a bird that adapts to human-caused habitat fragmentation and modification, it is likely that our provincial bird will continue to thrive in British Columbia.