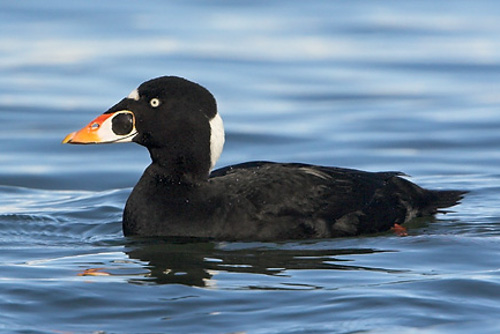 Characteristics and Range The Surf Scoter is a familiar sight in winter when over half a million birds congregate along the British Columbia coast, but only a handful of these remain to breed in the province. It breeds and winters almost exclusively in North America (fewer than 100 pairs breed in northeastern Russia; BirdLife International 2014). The bulk of the population breeds in boreal regions from western Alaska to Labrador (Savard et al. 1998). Despite its abundance, relatively little is known about its breeding biology.

Distribution, Abundance, and Habitat In British Columbia, breeding has been confirmed only in the Peace River district (British Columbia Conservation Data Centre 2014), where The Birds of British Columbia reported seven breeding records prior to 1990. The five years of atlassing produced no confirmed breeding records, but the species was reported from 10 locations within the Boreal Plains and Taiga Plains ecoprovinces, corresponding to the known breeding range. Two locations had probable breeding (pairs). Surf Scoters were also reported in four locations in the far northwest: a pair at one site indicated probable breeding, the other three had possible breeding evidence. The data are too sparse to reliably show changes to the breeding range within the province, but the failure to confirm breeding may correspond to the disturbing decline of this species in much of North America (Savard et al. 1998, BirdLife International 2014).

Data in Campbell et al. (1990) and the Atlas database suggest a breeding population of fewer than 100 pairs in the province; it is unlikely that a major breeding concentration has been overlooked.

Conservation and Recommendations Population declines in most parts of the species range have been reported for several decades, especially among birds that winter on the Pacific Coast, although the causes for these declines are not clear (Savard et al. 1998; BirdLife International 2014). British Columbia supports an insignificant portion of the global breeding population, but it is a major wintering ground, and research to determine causes of the population decline must include this province. The species is the focus of intensive research on the wintering grounds by the Canadian Wildlife Service and Centre for Wildlife Ecology, Simon Fraser University, and other Sea Duck Joint Venture partners across North America.