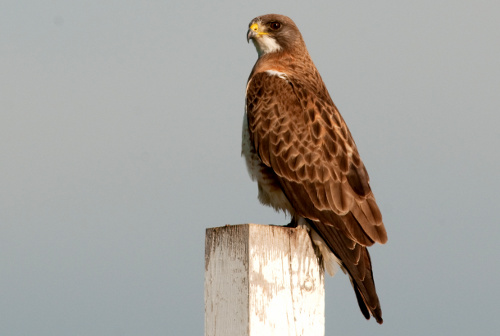 Characteristics and Range The Swainson's Hawk is famous for its long distance migration from the Prairies to the grasslands of southern South America - the longest migration of any Buteo hawk (Bechard et al. 2010). It is also well known amongst birders for the difficulty of identifying dark morph individuals. Most Swainson's Hawks breed throughout the Great Plains and Great Basin, south to northern Mexico; a few breed in isolated areas of British Columbia, and likely as far north as Yukon (Sinclair et al. 2003), Alaska (Gabrielson and Lincoln 1959) and Northwest Territories (Bechard et al. 2010).

Distribution, Abundance, and Habitat Confirmed, Atlas-period breeding of Swainson's Hawks is almost entirely restricted to the Southern Interior Ecoprovince. Campbell et al. 1990 also documented a small isolated breeding population in the Bulkley Valley. Atlasers found the species in the Bulkley Valley but failed to confirm breeding there. Swainson's Hawks appear to have expanded their range into the Boreal Plains and Sub-Boreal Interior ecoprovinces since The Birds of British Columbia was published in 1990. While there is only possible breeding evidence in these new areas, the species was documented breeding in the Peace River lowlands just before the Atlas period, and likely bred in the Boreal Plains Ecoprovince during the Atlas (Phinney 2015). Probable breeding in one square in each of the Coast Mountains, Central Interior and Sub-Boreal Interior suggests the species may be a very rare breeder over a larger part of the province than was previously believed.

The highest Probability of Observation is in the grasslands of the Thompson-Nicola valleys of the Southern Interior Ecoprovince. Confirmed breeding was restricted to lower elevation grasslands and agricultural habitats. A number of observations in alpine areas (Di Corrado 2015) likely represents dispersal by non-breeders or post-breeders. Most point count records and the highest abundances are found in the Bunchgrass, Ponderosa Pine and Interior Douglas-fir biogeoclimatic zones.

Conservation and Recommendations Historically Swanson's Hawk was a much more abundant species in British Columbia (Campbell et al. 1990, Siddle 1994), and some areas of the province where the species formerly bred are no longer used. Its small, declining population is the reason it is Red-Listed in British Columbia. However, Atlas data suggest a recent modest range expansion into other areas of the province. Birders are encouraged to look for Swainson's Hawks and document breeding, including in northern British Columbia (and the Yukon, Northwest Territiories and Alaska) and at higher elevations. Dark morph Buteos should be carefully scrutinized and photo-documented wherever they occur. Despite adapting to agricultural landscapes in some areas of North America, declines are continuing, in part due to declines in primary prey (Richardson's Ground Squirrel Spermophilus richardsonii) on the breeding grounds, and in part due to periodic highly toxic pesticide ingestion on the wintering areas in Argentina (Bechard et al. 2010). Best management practises for development around raptor nests have been produced by the province (British Columbia Ministry of Environment 2013).