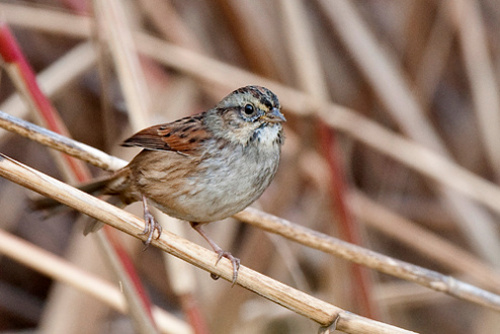 Characteristics and Range The Swamp Sparrow is a skulker and a lurker in marshy vegetation, more frequently detected by its song or call rising from the cattails. When it shows itself, it is a colourful smallish sparrow with rusty brown and streaked black upperparts, grey breast, face, and neck, and a lovely chestnut cap. It is a bird primarily of eastern and boreal North America, reaching the western extent of its breeding range in eastern British Columbia. The wintering grounds are in the southeastern United States and Mexico, and along the Pacific Coast from the lower Fraser Valley south (Mowbray 1997; Campbell et al. 2001).

Distribution, Abundance, and Habitat In British Columbia the Swamp Sparrow's breeding distribution is clustered in the Fort Nelson and Peace river lowlands in the northeastern part of the province, and more sparsely scattered in montane valley and plateau regions farther west and south. The Atlas has greatly expanded the confirmed breeding distribution in the province since the publication of The Birds of British Columbia in 2001, particularly west of the Rocky Mountains, suggesting a westward and southward range expansion to the Interior Plateau, the Cassiar Mountains, and the southernmost provincial breeding record in the Columbia Valley.

The Probability of Observation model indicates that the Swamp Sparrow is most likely to be found breeding in swamps and marshes of the Taiga Plains and, to a lesser extent, Boreal Plains ecoprovinces. Atlas point counts show the Taiga Plains remains the main centre of abundance, and suggest that local abundance in the Sub-Boreal Interior is also high. The Swamp Sparrow is most abundant at lower elevations, with more than half of all birds breeding below 500 m, and only about 10% breeding between 1,000 and 1,250 m.

Conservation and Recommendations Overall trends in Canada outside of British Columbia indicate an increasing population, based on Breeding Bird Survey data collected since 1970 (Environment Canada 2014). The Atlas suggests the population in British Columbia is also expanding. The Swamp Sparrow is susceptible to damage to its wetland habitats, which occurs through drainage, and pollution from agricultural or industrial runoff. This may be a concern for this species in portions of northeastern British Columbia where much liquefied natural gas exploration and development is taking place.