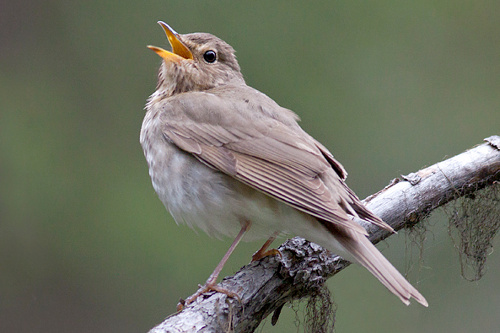 Characteristics and Range The beautiful, ascending, flute-like voice of the Swainson's Thrush contrasts with its dull plumage of subtle browns and a spotted creamy breast. The Swainson's Thrush is known on the British Columbia coast for "singing up the Salmonberry", which is an excellent way to remember that the Swainson's Thrush's ethereal song climbs up the scale. Swainson's Thrushes breed through much of North America's boreal, western lower montane, and Pacific slope forests, and migrate long distances to their wintering grounds that extend from southern Mexico to South America (Mack and Yong 2000). There are six subspecies segregated into two groups, the "russet-backed" coastal ustulatus group and the "olive-backed" interior swainsoni group, which meet and hybridise along a contact zone in British Columbia's Coast Mountains. These two groups use different migratory pathways to reach their separate wintering grounds along the Pacific Slope of Central America, and in northern South America, respectively (Delmore et al. 2012).

Distribution, Abundance, and Habitat In British Columbia, the Swainson's Thrush can be encountered almost anywhere and is indeed one of the province's most widespread birds; only the American Robin was recorded in more 10-km squares during the Atlas surveys. The main centres of abundance, with the highest Probability of Observation and abundance values, are in the Coast and Mountains, Georgia Depression, Sub-Boreal Interior ecoprovinces, parts of the Taiga Plains and Boreal Plains ecoprovinces, and along the Rocky Mountain Trench in the Southern Interior Mountains Ecoprovince. This approximately matches the conclusion of Campbell et al. (1997) that Swainson's Thrush is most numerous in the Sub-Boreal Interior and Coast and Mountains ecoprovinces.

It is common in second-growth coniferous forest near permanent sources of water (Campbell et al. 1997), though is less reliant on coniferous trees and more likely to be found in deciduous trees and shrubs compared to its congener the Hermit Thrush. Nests are most frequently found in thick shrubs and trees. In coastal regions, nests are often found within 3 m of the ground; in interior locations, Swainson's Thrush nests are also typically found close to the ground, though in rare instances may be found up to 24 m (typically in deciduous but also coniferous trees), often on a horizontal branch rather than next to the trunk (Campbell et al. 1997, Mack and Yong 2000).