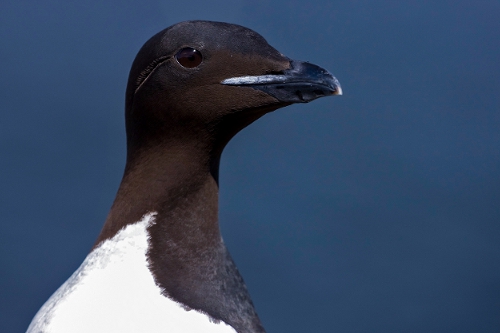 Characteristics and Range The Thick-billed Murre is one of the most numerous seabirds in the Northern Hemisphere. It is also among the deepest diving of all birds, regularly descending more than 100 m below sea level in search of its fish prey (Gaston and Hipfner 2000). It has a circumpolar distribution, breeding in colonies chiefly in arctic and subarctic regions, and wintering a little farther south; it reaches the southern limit of its Pacific Ocean distribution in British Columbia, where it was first discovered 1980. Two adults in the large Common Murre colony on Triangle Island increased to 70 adults there in 1982, representing an 800 km southward extension of the species' known breeding range (Vallee and Cannings 1983).

Distribution, Abundance, and Habitat This alcid breeds sporadically on Triangle Island, but is not known to breed anywhere else in British Columbia. It was not observed on Triangle Island during the Atlas despite observer effort, but single birds seen in 2013 and 2014 (but not 2015), in the same location it is known to have bred previously, continue the longer-term pattern of intermittent presence. Like the Common Murre, it breeds exclusively on remote islands, using cliff ledges or flat-topped rocks on headlands that provide direct access to the ocean (Gaston and Hipfner 2000); there are very few possible locations the species could nest in British Columbia away from Triangle Island.

Acknowledgements Catherine Jardine and Mark Hipfner kindly provided records and context for the Atlas period to 2015.