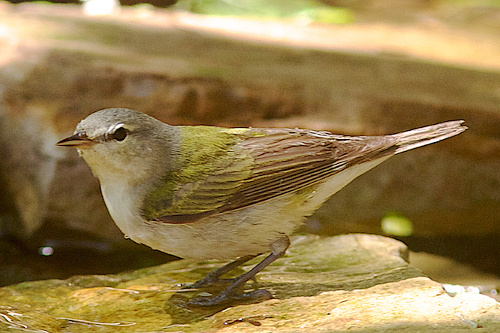 Characteristics and Range The Tennessee Warbler has undergone one of the most dramatic range increases of any bird in British Columbia over the past two decades. This warbler, with a bluish-grey head, bright olive-green upperparts, and dull whitish undersides, makes up for its rather drab colour with a loud, boisterous, staccato song. It breeds across the Boreal Forest from Pacific to Atlantic coasts, and is one of the wood warblers whose distribution and population is closely linked to outbreaks of Spruce Budworm (Choristoneura fumiferana) infestations (Rimmer and McFarland 2012). The Tennessee Warbler is a long-distance migrant, travelling from its boreal breeding grounds mainly over the western Atlantic Ocean to overwinter in Central America and northern South America.

Distribution, Abundance, and Habitat The Tennessee Warbler's distribution has changed enormously even since the final volume of The Birds of British Columbia was published in 2001. It has expanded widely across the Northern Boreal Mountains Ecoprovince, where there were very few previous records, and many distribution gaps have been filled right across the northern half of the province. Conversely, it perhaps slightly retracted north from the Southern Interior and southwest, where Campbell et al. (2001) noted a few summer records, but the Atlas recorded none.

The abundance is still highest in the Taiga Plains, where it is twice as common as in any other region, followed by the Boreal Plains and Northern Boreal Mountains ecoprovinces. It also appears to be more common in the southern Rocky Mountains. It is a boreal warbler whose population responds quickly to budworm infestations, much like the Cape May Warbler. Both species seem to have increased and spread into central and northern British Columbia, but the Tennessee Warbler, previously the more widespread of the two, has seen a much more dramatic distribution change. Campbell et al. (2001) noted that its numbers also vary locally and annually far more than those of any other warbler.

It is most abundant between 250 and 500 m elevation, the height of the Taiga Plains, and remains common up to around 1,000 m. It nests almost always on the ground in a variety of forested habitats generally associated with shrubby edge (Campbell et al. 2001), and also uses young successional habitats after commercial timber harvest (Rimmer and McFarland 2012). Its highest abundance is associated with northern, spruce-dominated biogeoclimatic zones, especially the Boreal White and Black Spruce, Spruce-Willow-Birch, and Sub-Boreal Spruce.

Conservation and Recommendations Rimmer and McFarland (2012) note the Tennessee Warbler is probably more abundant now than it was in the 19th Century because it has been able to exploit extensive budworm outbreaks and habitat alteration following commercial logging. Breeding Bird Survey trends across Canada and British Columbia show long-term increases (Environment Canada 2014), but with much variation, perhaps due to ephemeral population and distribution fluctuations related to Spruce Budworm outbreaks, which in turn may be related to temperatures and forest stand ages. Future monitoring could increase our understanding of the mechanisms behind these major fluctuations in the Tennessee Warbler's population.