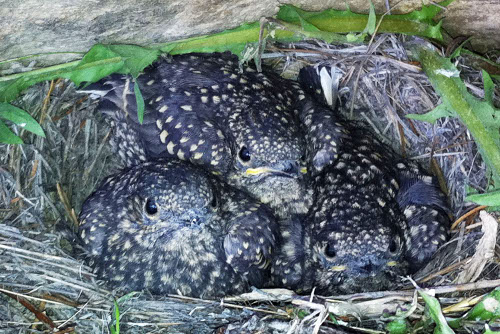 Characteristics and Range The Townsend's Solitaire is a subtly-plumaged member of the thrush family that is strongly associated with hill and montane environments as a breeding species. It is perhaps best known for its exquisitely beautiful song, which it uses to defend territories both in summer and winter. Non-breeding territories are established around food resources, usually fruits, especially of juniper (Juniperus) species (Bowen 1997). Its range spans the western cordilleras of North America, from Mexico's Sierra Madre north to Alaska's Brooks Range. Recent records from the Northwest Territories and Nunavut suggest the species may have a more northerly distribution than originally believed (Lamont in press). Southern populations are either resident or make short altitudinal migrations, but northern populations, including most in British Columbia, migrate longer distances to overwinter, usually to sites of high juniper densities (Bock 1982).

Distribution, Abundance, and Habitat The Townsend's Solitaire is most widespread on the plateaus and in the mountain ranges of southern British Columbia east of the Coast Mountains. The extent of the provincial range has not changed appreciably since The Birds of British Columbia was published in 1997, but Atlas data do fill a gap in breeding season distribution between about 53°N and 59°N, where previous literature suggested that the range was discontinuous (Bowen 1997, Campbell et al. 1997). Probable breeding occurs across the 650 km of this latitude band, but breeding during the Atlas is only confirmed in the foothills of the Rocky Mountains and the Skeena River headwaters, between 54°N and 56°N. The species is also more widely distributed on Vancouver Island and in the Georgia Depression than was previously known.

The Probability of Observation model and Atlas point count data show that the core of the British Columbia population occurs at higher elevations in the Southern Interior, and southern parts of the Southern Interior Mountains and Central Interior ecoprovinces, roughly as described in Campbell et al. (1997). Atlas point count data suggest abundance increases with elevation and is highest above 2,000 m, whereas Campbell et al. (1997) described the species as most often found between 500 and 1,800 m, perhaps an artefact of access limitations at higher elevations.

Conservation and Recommendations Breeding Bird Survey results suggest a large decrease in British Columbia and Canada since the 1970s, a trend that may be steepening, and a moderate decrease across the North American range as a whole (Environment Canada 2011). The reasons for these declines are not clear. Developing and testing hypotheses should be made a priority.