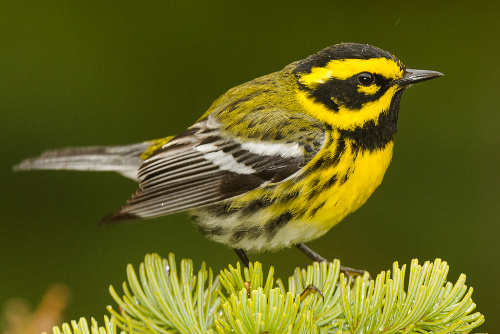 Distribution, Abundance, and Habitat Atlas records show no appreciable change in this warbler's range and distribution since the publication of The Birds of British Columbia in 2001. It continues to have a widespread distribution except on the drier plateaus of the central interior, and is largely absent from the Boreal and Taiga Plains northeast of the Rocky Mountains.

Probability of Observation and abundance is highest below 250 m elevation in the Coast and Mountains and Georgia Depression ecoprovinces, as described in Campbell et al. (2001). A secondary area of abundance is at higher elevation (1,000-1,750 m) across the Southern Interior, Southern Interior Mountains and the Sub-Boreal Interior ecoprovinces. The highest Atlas abundances were recorded in hemlock-, fir- and spruce-dominated biogeoclimatic zones, especially Coastal Western Hemlock.

Conservation and Recommendations The Townsend's Warbler has undergone a moderate long-term decrease based on Breeding Bird Survey data (Environment Canada 2011). The cause is not known, but some studies show the species prefers older forests with taller trees (Wright et al. 1998). Cotter (2005) states "the most important conservation issue in the Tongass Forest (Alaska) is likely the harvest of large conifer trees; the association of Townsend's Warblers and large coniferous trees should be considered in land-use decisions". Predation by introduced American Red Squirrels (Tamiasciurus hudsonicus) on Haida Gwaii is a local threat.

Contact and hybridization with Black-throated Green Warbler occurs along the eastern foothills of the Rocky Mountains in British Columbia (Toews et al. 2011). Further studies west of Fort Nelson River where the Atlas shows the two species also overlap could determine whether a second contact zone exists.