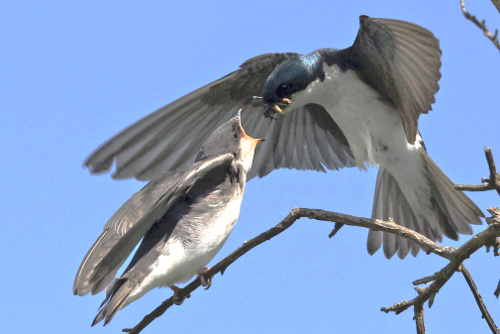 Characteristics and Range This steely-blue and white swallow is a secondary cavity nester that can, surprisingly for a swallow, subsist on seeds and berries. It is well known for its willingness to nest in boxes which, together with its general hardiness and tractability, has attracted researchers who have contributed important new knowledge to fields as diverse as ecotoxicology and the impacts of climate change. The Tree Swallow's breeding range extends across most of North America, excluding only the Arctic tundra. It winters from Baja California to the Gulf Coast and south through Central America and the Caribbean to northern South America (Winkler et al. 2011).

Distribution, Abundance, and Habitat There has been no major change in the extensive provincial breeding range of the Tree Swallow since The Birds of British Columbia was published in 1997. However, the Atlas records suggest that there may have been recent local increases in its range in some parts of the province. For example, Campbell et al. (1997) noted an absence of records in the Northern Rocky Mountain Trench where the Atlas data shows a cluster of records in the vicinity of Williston Lake. Similarly, the Atlas records confirm breeding in several accessible areas in the western part of the Northern Boreal Mountains Ecoprovince where previous summer/breeding records were scarce.

The most extensive areas of high Probability of Observation values are on the plateaus of the Central Interior Ecoprovince and in the valleys of the Southern Interior Ecoprovince, indicating that these regions support the core of the provincial Tree Swallow population, as was the case when The Birds of British Columbia was published. High abundance values from point counts corroborate this, although the highest numbers of this bird occur in the Southern Rocky Mountain Trench. The concentration of Mountain Pine Beetle (Dendroctonus ponderosae)-killed trees in these areas, coupled with nest box programs, may be increasing nesting opportunities.

Conservation and Recommendations Breeding Bird Surveys indicate that the Tree Swallow is undergoing a gradual decline, in common with many other aerial insectivores (NABCI-Canada 2012), and that the decline is slightly more pronounced in British Columbia than across Canada as a whole. Possible causes include insect declines due to pesticides, loss or pollution of wetlands, loss of nesting cavities due to scarcity of old trees (clear-cut logging, fire suppression) and competition from introduced animals like the European Starling, although the influence of starlings on native secondary cavity-nesting passerines, including the Tree Swallow, is modest where cavities are abundant (Koch et al. 2012). Nest boxes of appropriate dimensions and spacing can usefully be installed in suitable breeding habitat where natural cavities have been lost, or are limiting.