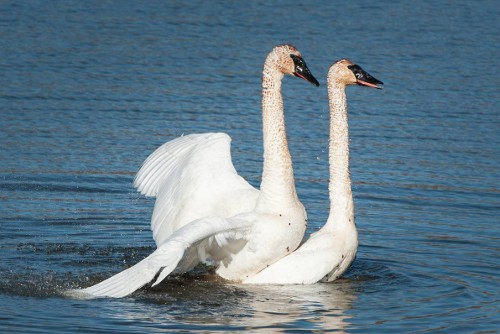 Characteristics and Range The Trumpeter Swan is recognizable by its large size, all-white plumage, and characteristic 'trumpeting' call. The Trumpeter Swan breeds widely throughout western North America in three discrete populations: the Pacific Coast, Rocky Mountain and Interior populations. The Rocky Mountain and Pacific populations breed in British Columbia. Although it was formerly abundant and geographically widespread, its numbers and distribution were greatly reduced through hunting by settlers for their own use and for the swan skin trade. Only 69 individuals were known to exist in 1935, although unrecorded flocks also inhabited parts of Alaska and Canada. Its recovery has been a conservation success story, as it has continued to increase and expand its range since the first range-wide survey in 1968 (Mitchell and Eichholz 2010).

Distribution, Abundance, and Habitat The Trumpeter Swan is most widespread across northeastern British Columbia, and is a more locally distributed breeder across north and northwestern parts of the province. It is also present on the Interior Plateau and in the Rocky Mountain Trench. The Atlas surveys confirmed breeding along the Stikine River, a region where it was not reported when The Birds of British Columbia was published in 1990. The breeding ranges of both Pacific Coast and Rocky Mountain populations in British Columbia are becoming larger. The Atlas also adds considerably to the confirmed and probable breeding locations in British Columbia (cf. Campbell et al. 1990). Most nesting is below about 1,000 m.

The greatest Probability of Observation is in the Petitot River drainage in far northeastern British Columbia, in the Taiga Plains Ecoprovince. Away from here, and the Liard River drainage and Haines Triangle in the Northern Boreal Mountains Ecoprovince, there is a low to very low chance of finding the species. Too few Atlas data are available to draw firm conclusions on abundance. In 2010, the Pacific Coast population in western Yukon and northwestern British Columbia. Was estimated at 1,443 individuals, and the Canadian portion of the Rocky Mountain population was estimated at 8,950 individuals (CWS Waterfowl Committee 2012, Groves 2012).

Trumpeter Swan nests in remote, northern, freshwater marshes, ponds, and lakes that have emergent vegetation and are free from disturbance. These specific factors are more important determinants of breeding than broader habitat categories.

Conservation and Recommendations The Trumpeter Swan is often considered a classic conservation success; the species has responded well to most conservation and management actions and continues to increase in numbers and distribution (Mitchell and Eichholz 2010). Continuing efforts are needed to manage for potential conflicts with agriculture and for disturbance by human activities.