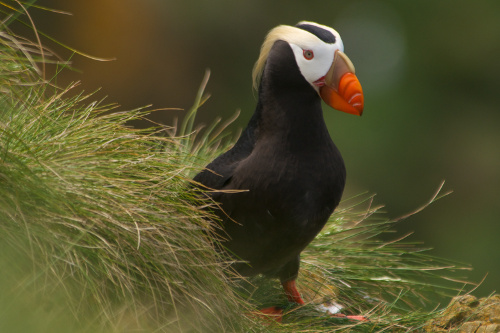 Characteristics and Range The most oceanic of the alcids, and arguably the most beautiful, the Tufted Puffin is a large, diurnal, burrow-nesting auk, named for the long, wispy, golden plumes that drape down the back and sides of its neck. Not abundant as a breeder in British Columbia, the species has an expansive range across the North Pacific Ocean, breeding from California north to the Chukchi Sea in the Arctic and west to Japan (Piatt and Kitaysky 2002). Like all puffins, it is a generalist feeder, with a massive bill, brilliant orange during the breeding season, designed to catch and hold fish and larger invertebrates.

Distribution, Abundance, and Habitat Breeding has been recorded at a total of 31 sites in British Columbia, all on remote islands concentrated off the northwest end of Vancouver Island and the south end of Haida Gwaii (Campbell et al. 1990). The largest aggregation is located at Triangle Island, where some 25,000 pairs breed. Highly pelagic, during the breeding season it generally forages at low density over deep water, often seaward of the continental shelf.

Unmistakable in breeding plumage, the Tufted Puffin is not an abundant species away from Triangle Island at any time in British Columbia, and is not commonly seen in inshore waters. It is not easily covered on surveys, because all breeding colonies are located on remote islands that are unlikely to have human visitors. Very few of the known breeding colonies were visited during the Atlas survey period.

It nests in the open on the steep, vegetated slopes of remote, rocky islands in areas that offer direct access to the sea. The Tufted Puffin digs a nesting burrow that can be several metres long in deep soil.