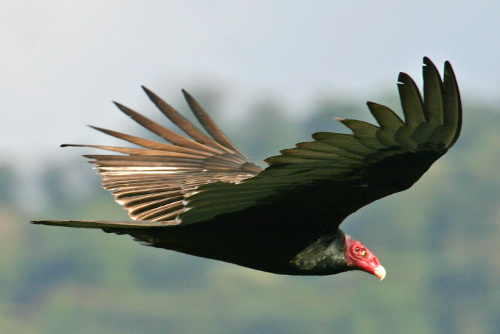 Characteristics and Range This adaptable scavenger has highly developed olfactory senses that enable it to detect carcasses beneath a closed tree canopy (Kirk and Mossam 1998). The genus name Cathartes means "purifier", or ecological cleaner. The Turkey Vulture is the most widely distributed vulture in the Americas, reaching the northern limit of its range in British Columbia and other parts of southern Canada. Some populations are resident, but the northern breeders are long-distance migrants that follow traditional routes to overwinter in Central and South America.

Distribution, Abundance, and Habitat The Turkey Vulture's distribution is widespread across the southern quarter of British Columbia south of 51°N, locally extending farther north along the Southern Rocky Mountain Trench (to 53°N), across the Cariboo Plateau, and to an isolated patch on the western Chilcotin Plateau. Since The Birds of British Columbia was published in 1990, several valley systems have been colonised or more widely occupied, including the Lillooet, middle Fraser, Thompson-Nicola, Okanagan, Columbia and Kootenay rivers. This is part of a long-term, North America-wide northward range expansion (Kirk and Mossam 1998); Campbell et al. (2005) map the expansion in British Columbia, including pre-Atlas records to 55°N. The paucity of confirmed and even probable Atlas breeding records reflects this species secretive breeding behaviour, remote nest site choice, and the fact that it ranges widely in search of food. Less than 300 pairs are estimated to breed in British Columbia Campbell et al. (2005); breeding has yet to be confirmed farther north than Shuswap Lake, as noted in Campbell et al. (1990).

The Probability of Observation model and the small number of positive detections on point counts indicate that the centres of abundance are southern and eastern Vancouver Island and the Gulf Islands in the Georgia Depression Ecoprovince, and secondarily the Okanagan and Thompson river catchments in the Southern Interior Ecoprovince and southern sections of the Columbia and Kootenay river catchments in the Southern Interior Mountains Ecoprovince. Turkey Vultures prefer drier biogeoclimatic zones and lower elevations (below 750 m), but occur as high as 1,250 m on interior plateaus.

Breeding habitat is usually more remote and little disturbed rocky or closed-canopy forest habitats. Nests are situated on the ground, in caves, crevices in cliffs and other rocky locations, or in boulder piles, under fallen logs, or other shelter structures in forest locations (Campbell et al. 2005).

Conservation and Recommendations There are no conservation concerns for this species, which is increasing across the northern part of its range, likely as a result of some combination of reductions in organochlorine and lead contamination in the environment, increasing deer populations, and increases in carrion along expanding and increasingly busy road networks (Peck 2007, Environment Canada 2011).