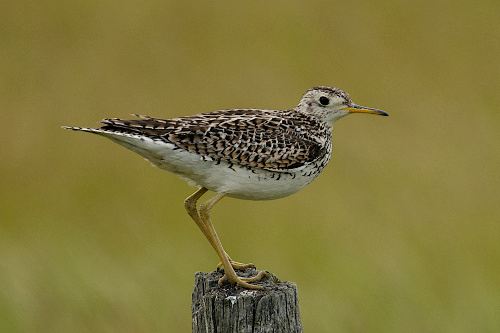 Characteristics and Range For prairie residents, the cryptically-coloured, dove-headed Upland Sandpiper perched on a fence post is a common sight, and its long, whistling call is a familiar sound. It is a quintessential grassland species and, unusually for a shorebird, shows no affinity for wet areas. The core of the Upland Sandpiper's breeding range is in the northern and central Great Plains. It is sparsely distributed eastward through the Great Lakes to the Atlantic Coast where remnant grasslands or other suitable habitats exist. Separate isolated populations exist farther west to Alaska (Houston et al. 2011). It is a very long-distance migrant, spending the winter in central South America.

Distribution, Abundance, and Habitat The Upland Sandpiper is found primarily in the Boreal Plains Ecoprovince in northeastern British Columbia There was one record from the Chilcotin Plateau, which probably represents a very small but persistent population, since the species has been reported from that general area several times in recent decades (e.g. Hooper 1997). Upland Sandpiper was also reported in successive years from a single 10-km square along the Liard River in the Northern Boreal Mountains. Whether this represents a southern extension of the far northwest breeding area or is merely an isolated occurrence is unknown. Interestingly, there are no Atlas records from the Fort Nelson lowlands, East Kootenay, or Okanagan areas where they have been found or suspected to nest in the past (Campbell et al. 1990, Ramsay and Cannings 2003).

The Upland Sandpiper is a rare and sparsely distributed bird in British Columbia, illustrated by the low Probabilities of Observation in the Peace River lowlands, its core range in the province. It can easily be overlooked, and is probably slightly more widespread than the Atlas data suggest. Ramsay and Cannings (2003) estimated the British Columbia Population to number 50-1,000 individuals.

In the Boreal Plains, natural grasslands and prairie habitat are limited to tiny fragments on un-farmable slopes. Upland Sandpipers have adapted fairly well to the agricultural landscape that now dominates the area. Hayfields and lightly-grazed pasture land provide suitable habitat. The birds may occasionally use crop fields, but nesting success is likely poor, as a result of multiple equipment passes for tilling, seeding, and spraying. In the Chilcotin area, Upland Sandpipers were found in lightly grazed natural grassland habitat (Hooper 1997).

Conservation and Recommendations Once tremendously common in prairie landscapes, the Upland Sandpiper also spread into newly created agricultural land as forests were cleared by settlers. Populations were decimated by hunting in the late 1800s, from which they never fully recovered. Ultimately, the more significant impact was the loss of breeding habitat through plowing and cultivation of natural prairie grassland (Houston et al. 2011). Breeding Bird Survey data indicate a long-term decline, and the Upland Sandpiper is Red-listed in British Columbia because of its very small population here. Although agricultural development is the primary threat to habitat in the bird's core grassland range, light agriculture in the form of hayfields and livestock pasture can create habitat. There is probably more suitable habitat in northeastern British Columbia now than at any time in the past. However, this land is privately-owned, and land-use decisions are driven by tradition and market forces.