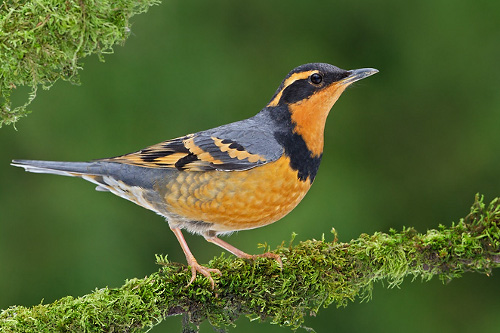 Characteristics and Range Bird-watchers and non-birdwatchers alike may be more familiar with the Varied Thrush's sweet but eerie song that emanates from British Columbia's dark, humid forests than with actual sightings of this shy and handsome bird. It is a quintessential northwestern North American species, endemic to moister mountain forests from the Alaskan Brooks Range to the Californian Sierra Nevada, where it is a year-round resident and a short-distance and altitudinal migrant. It is a classic bird of British Columbia's forests, which together with its striking appearance and familiarity in winter when it visits urban and suburban gardens, garner it the accolade of being the logo for this Atlas.

Distribution, Abundance, and Habitat The Varied Thrush is a widespread breeding species in cool forests from the Rocky Mountains west. It is largely absent from the drier interior plateaus and the north-eastern plains. Compared to The Birds of British Columbia published in 1997, the Atlas has filled in distribution gaps in northern British Columbia because of increased, systematic surveys. Due to its secretive nature and propensity to nest in dense habitat, it was only confirmed to breed in approximately 12% of 10-km squares.

The highest abundance is in the wet rainforests of the Coast and Mountains Ecoprovince. Two other ecoprovinces also support high abundances: the Southern Interior Mountains, where Campbell et al. (1997) reported the highest numbers, and the Sub-Boreal Interior. The Probability of Observation model also highlights these three areas as the most likely places to find the bird in the province.

It is found throughout coniferous and mixed forests but the highest abundances coincided with humid forests and moist habitats in the Coastal Western Hemlock, followed by Engelmann Spruce - Subalpine Fir and Interior Cedar - Hemlock biogeoclimatic zones. It was recorded from sea level to 2,500 m but is most common between 1,250 and 2,250 m, and also quite common below 250 m in coastal regions.

Conservation and Recommendations The population status of the Varied Thrush has shown little overall change on Breeding Bird Surveys since 1970. Recent studies suggest that it breeds most commonly in mature and old-growth forests and may be sensitive to forest fragmentation (George 2000).