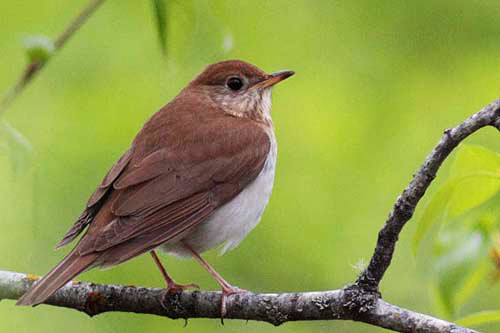 Characteristics and Range Along with the Hermit Thrush, Swainson's Thrush, and the most closely related Gray-cheeked Thrush, the Veery belongs to the woodland thrush genus Catharus, known for its retiring habits and beautiful songs. Combined with its preference for dense, wet woodlands for breeding, the Veery is inconspicuous even for a Catharus thrush, and is usually detected by its song or loud, querulous calls. The Veery breeds across the Prairie and Great Lakes regions to the Atlantic Coast, and in some western cordilleras and the Appalachian Mountains. It winters in southern Amazonia (Bevier et al. 2005).

Distribution, Abundance, and Habitat The Veery breeds along many of the waterways of southern and central interior British Columbia Localized breeding also occurs in coastal valleys north to the Nass River. The Atlas showed a breeding distribution similar to that depicted in The Birds of British Columbia in 1997, but also found more extensive coastal records, likely due to increased coverage.

The Birds of British Columbia noted the Veery was most abundant in the Southern Interior Ecoprovince. The findings of the Atlas expanded on this assessment. The Probability of Observation map also highlights valleys in the upper Thompson and adjacent Columbia River drainage, and valleys in the eastern rain shadow and west of the Coast Mountains, as the most likely places to find the species. Atlas point counts confirm abundance is highest in the Southern Interior Mountains, Coast and Mountains, and Southern Interior ecoprovinces. Given the continued loss of riparian habitat in the Okanagan Valley during the past 18 years, it is likely that the Atlas assessment that there are now two or three centres of abundance is accurate.

The Veery is closely associated with lowland riparian thickets and swampy woodland. It occurs in highest abundance between 250 and 750 m. Throughout its breeding range, the Veery favours wetter deciduous and early successional forests compared to the habitat chosen by the Hermit Thrush, and the Veery more often occurs around beaver ponds (Campbell et al. 1997, Bevier et al. 2005).

Conservation and Recommendations Although not currently considered of conservation concern, the Veery has shown significant declines on Breeding Bird Survey routes in B.C and across Canada since 1970 (Environment Canada 2011). Some possible causes of the decline may include cowbird parasitism, and habitat destruction and degradation. Due to its preference for riparian lowlands, the Veery is susceptible to habitat loss from creation of reservoirs for hydro power and other uses.