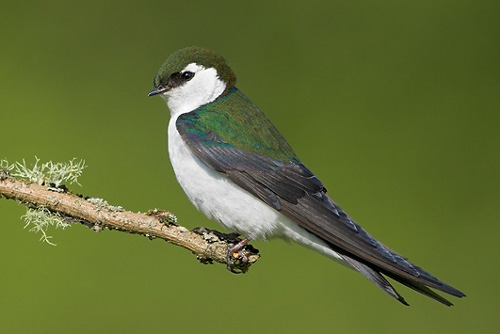 Characteristics and Range This small, sleek swallow is distinguished from the closely-related Tree Swallow by its short tail, white rump patches, and white cheeks. It is perhaps the most adaptable of our swallows, amenable to nesting in or on a great variety of human structures. The breeding range of this species extends along the Pacific coast from the Boreal Forest to the Sierra Madre, and inland across the Western Cordillera to the eastern limits of the Rocky Mountains. It winters in Central America (Brown et al. 2011).

Distribution, Abundance, and Habitat The breeding distribution of this species has changed little since The Birds of British Columbia was published in 1997. The irregular decline in records from south to north across the province noted by Campbell et al. (1997) is still evident, perhaps reflecting, a northward decline in observers. Atlas data suggest that numbers of swallows may have increased recently in some local areas, such as the Rocky Mountain Trench and the far northwest of the Southern Interior Ecoprovince, but this could simply reflect increased observer effort.

This species is most common across southern British Columbia south of 51°N, from the Georgia Depression to the Rocky Mountains, although there is much local variability in Probability of Observation. PObs values are highest in the valleys and lowlands and considerably lower on the intervening uplands. The Violet-green Swallow is most abundant at elevations below 250 m. It is most numerous in the Georgia Depression Ecoprovince, as previously noted in The Birds of British Columbia. Further north, the pattern of moderately high Pobs values suggests that the species occupies patches of suitable landscape across all ecoprovinces except the eastern Taiga Plains and northern Boreal Plains. This species is associated with a variety of biogeoclimatic zones in both coastal and interior regions.

The Violet-green Swallow's nesting habitat requirements are somewhat similar to those of the Tree Swallow but, unlike the Tree Swallow, this species usually nests in rock cavities on cliffs, commonly forming colonies of 20 pairs or more. A secondary cavity nester, it also adopts holes in trees adjacent to open country where there are lakes and wetlands that produce abundant flying insects. It readily adapts to human landscapes, commonly nesting in nooks and crannies in buildings and other structures. It also uses nest boxes, although perhaps less willingly than the Tree Swallow (Brown et al. 2011). Campbell et al. (1997) reported 75% of recorded nests were in human habitats.

Conservation and Recommendations Breeding Bird Survey data show a stable long-term trend, and the species is not currently of conservation concern, although aerial insectivores generally are showing stronger declines than most other bird groups (NABCI Canada 2012). The House Sparrow (and perhaps the European Starling) frequently displaces the Violet-green Swallow from nest sites. This bird may benefit from nest box installation programs.