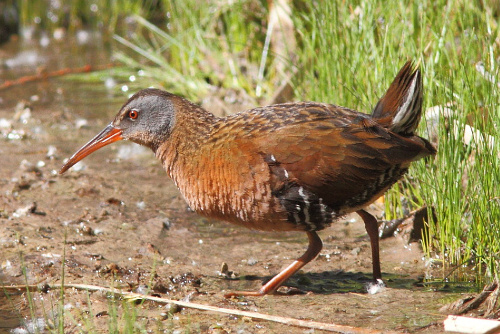 Characteristics and Range Patience or luck is required to see the secretive Virginia Rail, a bird of thick marshes that is far more often heard giving its nasal territorial calls and grunting duets than it is seen. A traditional birders' technique for quickly assessing the species' presence is to give a single loud hand clap at the edge of suitable habitat; if a bird is present, it will often respond by calling. It is well adapted to manoeuvring through dense tall stems in having a laterally compressed body, flexible vertebrae, and special feathers on its forehead that do not wear down from constant abrasion (Conway 1995). A medium-distance migrant, the Virginia Rail breeds in wetlands across North America from the southern boreal in the east through the Great Lakes and Prairies to the major drainage basins of the west. It winters along Pacific, Atlantic and Gulf coasts and across northern Mexico, and there are resident populations in parts of South America.

Distribution, Abundance, and Habitat In British Columbia, the Virginia Rail is quite widespread in wetlands across the central-southern interior and the southwest of the province, especially in the Georgia Depression, the Okanagan and Nicola valleys, and interior plateaus. The Atlas mapped a slightly wider provincial distribution than was known when The Birds of British Columbia was published in 1990, including more records on the western Chilcotin and Interior Plateaus, in the Southern Rocky Mountain Trench and the Peace River lowlands. This may be due to wider survey coverage, but each of these regions has traditionally been well covered by birders, and Campbell et al. (1990) considered it a very rare summer visitor to the west Kootenay and Chilcotin-Cariboo region, so a genuine range expansion may be taking place.

It occurs in low numbers, reflected in the low Probability of Observation values even in the areas where it is most reliably found: the Chilcotin Plateau and valley floor wetlands of the Fraser, Thompson, Okanagan and Lillooet rivers. Too few data were collected to draw conclusions about abundance, because the Atlas randomised point counts did not capture a sufficient proportion of the localised wetland habitats of this difficult-to-detect bird.

Conservation and Recommendations The Atlas results hint at an expanding Virginia Rail range in British Columbia; continued data collection through programs such as eBird and future atlases will help clarify the situation. It is potentially vulnerable to drought periods and projected long-term drying through climate change (e.g., Hamann and Wang 2006).