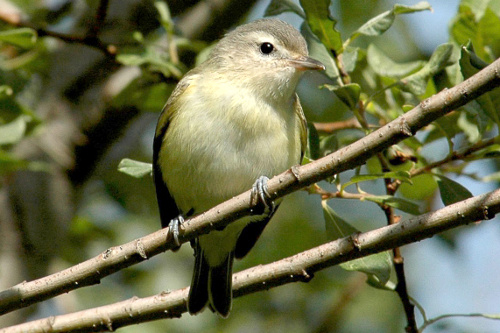 Characteristics and Range The Warbling Vireo is one of the most abundant and familiar breeding birds in deciduous stands throughout most of British Columbia. Its euphonious song is heard almost everywhere in the province. It breeds in North America's deciduous forests from Pacific to Atlantic coasts, largely south of the Boreal Forest except in the west, and at higher elevations south to central Mexico. It is a short- to medium-distance migrant that winters from Mexico south to Central America. The Warbling Vireo has been divided into two subspecies groups; the eastern gilvus group, and the western swainsoni group. These two groups differ significantly in morphology, genetics, song, habitat preference, and other characteristics, and may in fact represent two different species (Gardali and Ballard 2000). Birds in British Columbia all belong to the subspecies V. g. swainsoni.

Distribution, Abundance, and Habitat The Warbling Vireo occurs widely throughout the province, and is one of the most ubiquitous and omnipresent breeding birds in British Columbia; it was recorded in 2,788 10-km squares, the fifth highest total for any species in the province. There is no indication of a change in distribution since the publication of The Birds of British Columbia in 1997, but the Atlas data fill in some apparent gaps in northern parts of the province. It is absent on Haida Gwaii.

The Probability of Observation values are highest and most extensive in the Sub-Boreal Interior, and parts of the Boreal Plains, Taiga Plains, and Southern Interior ecoprovinces, and along the Rocky Mountain Trench. Highest abundance on Atlas point counts is in the Sub-Boreal Spruce biogeoclimatic zone of the Sub-Boreal Interior Ecoprovince, where Campbell et al. (1997) also considered Warbling Vireo to be most numerous; it is also very common in other spruce and hemlock-dominated biogeoclimatic zones in the ecoprovinces with highest PObs values. The species occupies a wide elevation range, but the abundance is highest from 500 to 1,250 m The large area with apparent low PObs in north-central British Columbia may reflect lower coverage in most of that area, whereas the low PObs in far northwestern British Columbia and in the Coast Mountains reflect large areas at high altitude with few or no vireos.

The Warbling Vireo will breed in almost any area of deciduous or mixed forest, but tends to avoid or to be scarce in pure conifer forest. It seems especially fond of Trembling Aspen (Populus tremuloides) groves, a favoured habitat through much of its range in western North America (Gardali and Ballard 2000). It is also common in streamside vegetation such as cottonwood (Populus), willow (Salix) and birch (Betula) species. However, upland deciduous and mixed stands, including alders (Alnus species) and second-growth that develops in conifer forests after logging or fire, are also frequently used.

Conservation and Recommendations There are no conservation concerns for this species, which has shown a long-term increasing trend for all of North America based on the Breeding Bird Survey (Sauer et al. 2014). In British Columbia, this increase is slightly higher than the continental average.