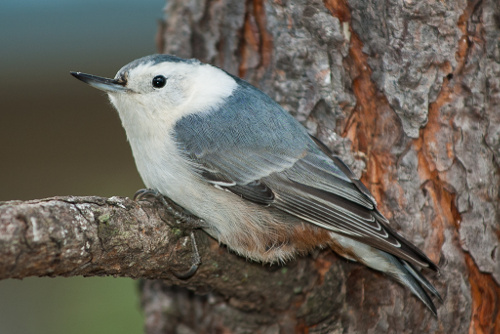 Characteristics and Range This nuthatch, easily distinguished from other nuthatches in British Columbia by its large size and white face and breast, may in fact comprise up to four separate species, two of which currently breed in British Columbia (Spellman and Klicka 2007, Walstrom et al. 2012). It is resident in a wide variety of forested habitats across North America, from the southern edge of the Boreal Forest to the Mexican Sierra Madre (Grubb and Pravosudov 2008).

Distribution, Abundance, and Habitat Two distribution clusters are found within British Columbia: one in the northeast, of the eastern clade; the other in the southern interior, of the Great Basin and northern Rocky Mountain clade (Grubb and Pravosudov 2008). The Atlas surveys documented a more widespread distribution in the Peace River Basin, and more records in the central interior, than were known when The Birds of British Columbia was published in 1997. This is likely the continuation of a long-term expansion; Campbell et al. (1997) noted that central British Columbian records may represent an expanding population from the Peace region. The southern interior population is found in dry valleys of the Okanagan, Similkameen Thompson, Fraser, and Nicola rivers, and in the Southern Rocky Mountain Trench; its distribution has changed little since publication of The Birds of British Columbia.

Conservation and Recommendations There are few conservation concerns for this species as the populations in the province are either stable or increasing (Environment Canada 2011). The population in southern British Columbia nests primarily in mature and old-growth forest, which has been heavily affected by logging and the recent Mountain Pine Beetle (Dendroctonus ponderosae) outbreak (Klenner et al. 2008). However, while loss of mature and old-growth forest to Mountain Pine Beetle or fire may continue, forest age may not act as a limiting factor for this species (Flannigan and van Wagner 1990). The population in the Peace region and central interior has been expanding for decades.