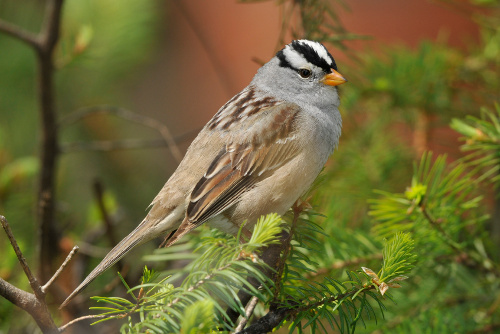 Characteristics and Range With its boldly striped, black and white head and its bright song delivered from open perches, this large sparrow is usually conspicuous on its breeding grounds and, for this reason, has been the focus of many studies. Its breeding range extends throughout the arctic tundra of the North American mainland, and continues south through much of the western cordillera to about 37°N. Its winter range covers the southern half of the continent, reaching its northern limit in southern British Columbia (Chilton et al. 1995). Three (of four) subspecies are found in British Columbia: the long-distance migrant Z. l. gambelli, which breeds at high elevations and in the north, the shorter-distance migrant Z. l. leucophrys, which breeds in the interior, and the largely sedentary Z. l. pugetensis on the south coast (Chilton et al. 1995).

Distribution, Abundance, and Habitat Comparison of Atlas records with The Birds of British Columbia shows that the overall breeding range of the White-crowned Sparrow has varied little since the late 1990s, although there may be some local changes. The Atlas suggests a possible increase in numbers in a few areas, including the mainland coast of the Georgia Depression Ecoprovince and adjacent mountains, and parts of the Central Interior Ecoprovince.

Probability of Observation results show that the White-crowned Sparrow can be found readily in most parts of the province. The Atlas confirmed The Birds of British Columbia report of highest numbers in the Georgia Depression and Northern Boreal Mountains ecoprovinces, although in the latter area, high abundance is restricted to the Yukon and Stikine plateaus, Skeena Mountains, and the southern tip of the St. Elias Mountains. The elevation plot illustrates the disparate nesting patterns of the subspecies: the affinity of Z. l. pugetensis for human-modified landscapes, especially in the Georgia Depression, results in an abundance peak at 0-250 m elevation, while Z. l. gambelli/leucophrys's preference for open areas at montane and alpine elevations gives rise to the secondary peak at 1,750-2,000 m.

Important features of nesting sites selected by this sparrow are: grassy openings with some bare ground for foraging; nearby dense shrubs or small trees to shelter roosting birds and nests that are built on or very close to the ground; taller trees for singing perches; and nearby water. Low-elevation nesting areas are commonly associated with human activities (parks, gardens, farms), but include a variety of treed landscapes (forest edges, riparian stands). Higher elevation nest sites are typically in subalpine parkland, but include openings related to industry (forestry, transmission lines) and other clearings. Point count data show that this bird nests in a variety of biogeoclimatic zones, suggesting that nesting locations are determined primarily by site conditions, although it is especially abundant in the Spruce-Willow-Birch in the northern mountains.

Conservation and Recommendations Breeding Bird Survey (although of low reliability) and Christmas Bird Count data suggest that the White-crowned Sparrow population is stable. This bird's use of human-related forest openings for nesting, as well as its affinity for expanding urban areas, will likely continue to influence its breeding range and population density.