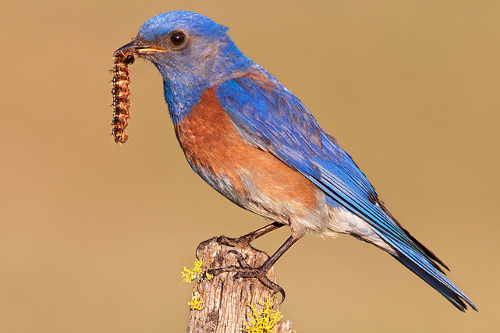 Characteristics and Range Found across open woods and meadows of western North America, Western Bluebirds flash their bright blue and rust-coloured plumage as they swoop from low perches to catch insects in mid-air or on the ground. The species reaches the northern limit of its range in southern British Columbia. Although small numbers can often be found in British Columbia during the winter, most retreat to warmer habitats at lower elevations and migrate further south within their breeding range (Campbell et al. 1997, Guinan et al. 1998). Birders, naturalists, land managers and biologists are working together to reintroduce and restore Western Bluebird populations to their historic breeding range in the Georgia Depression along the Pacific Coast.

Distribution, Abundance, and Habitat Western Bluebird distribution is limited to southern British Columbia, where it is most numerous at elevations below 750 m in the Southern Interior Ecoprovince, primarily in the Okanagan Valley, followed by the East Kootenay Valley in the Southern Interior Mountains Ecoprovince. This pattern is similar to that known when The Birds of British Columbia was published in 1997. Breeding birds are also sparsely scattered throughout these ecoprovinces and in southern parts of the Central Interior and Georgia Depression Ecoprovince.

Conservation and Recommendations While the Breeding Bird Survey marks population increases in the Great Basin and Northern Rockies Bird Conservation Regions (Environment Canada 2014, Sauer et al. 2014), Western Bluebirds continue to decline along the Pacific Coast, remaining well below historic population and distribution in the Georgia Depression Ecoprovince, which is why this coastal population is on the provincial Red List. The main threats to Western Bluebirds, especially on the coast, continue to be the loss and degradation of lowland open forested habitat due to fire suppression, urbanization, snag removal, logging and changes in agricultural practices, and contaminant loading of the prey base especially on the coast (Guinan et al. 1998). Introduced European Starlings and House Sparrows also compete for nesting cavities. The Garry Oak Ecosystem Recovery Team and partners in the United States continue to translocate pairs of bluebirds from a healthy coastal population in neighbouring Washington. In 2012, the first Western Bluebirds since 1995 hatched on Vancouver Island (GOERT 2015).