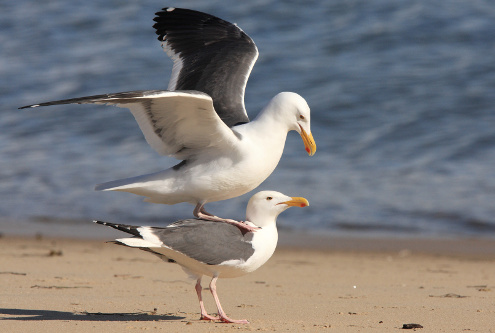 Characteristics and Range The Western Gull is among the largest of North America's gulls but has a breeding range restricted to the Pacific Coast of the United States and numbers only about 40,000 pairs (Pierotti and Annett 1995). It hybridizes frequently with the Glaucous-winged Gull, particularly in the northern part of the Western Gull's range, producing offspring often intermediate in appearance between the two species (Wahl et al. 2005).

In its breeding range south of British Columbia, the Western Gull nests on rocky islands, offshore rocks, and isolated piers. The species forages at beaches, garbage dumps, over offshore waters, and even inland on ploughed fields.

Conservation and Recommendations The Western Gull is not of conservation concern in British Columbia, but detailed study of Glaucous-winged Gull colonies would clarify if and how frequently Western Gulls attempt to breed in the province.