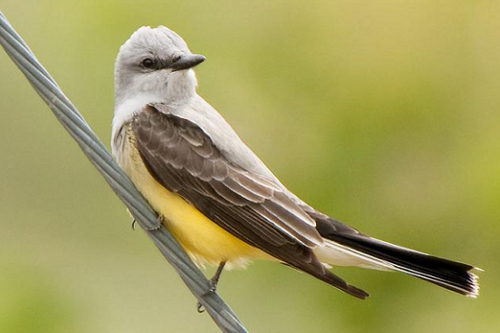 Characteristics and Range This large grey flycatcher with a lemon-yellow belly and black tail is often seen hawking for insects in open country. The Western Kingbird breeds from southwestern Canada south to northern Mexico (Gamble and Bergin 2012). A medium-distance neotropical migrant, it winters from the Pacific coast of central Mexico south to Central America. The planted trees, buildings, and utility poles that followed human settlement across the western plains of North America in the last century are favoured by the Western Kingbird and allowed its westward spread (Campbell et al. 1997, Gamble and Bergin 2012).

Distribution, Abundance, and Habitat The Western Kingbird is a fairly widespread breeder in the valleys of southern British Columbia, centered in the Southern Interior Ecoprovince. The distribution from the Atlas is similar to that reported by Campbell et al. (1997).

The highest Probabilities of Observation are in the Okanagan, Thompson-Nicola and Fraser river valleys in the Southern Interior Ecoprovince, which is also where most Atlas point count data were recorded. Abundance here, however, did not vary greatly from locally high abundance values (based on small point count samples) in neighbouring ecoprovinces. Elevation is a better predictor of abundance, the species being most common between 250 and 500 m, an elevation range corresponding to valley floor locations supporting plentiful man-made or planted perching and nesting locations, within the three driest biogeoclimatic zones, Interior Douglas-fir, Ponderosa Pine, and Bunchgrass.