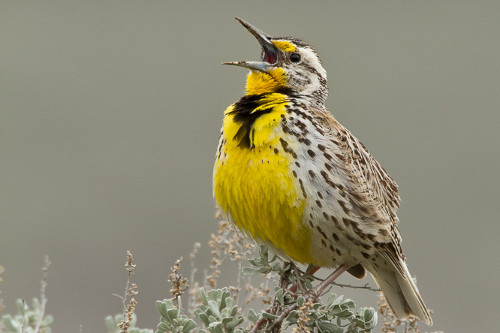 Characteristics and Range The Western Meadowlark is an iconic species of the North American West. Its loud, melodic song and bright plumage are an integral part of grasslands across the Great Plains and western intermontane valleys. Like many grassland species, it is boldly patterned below with a yellow breast, black necklace and white outer tail feathers, but from above it is so cryptically plumaged that it is scarcely discernable amid the dry bunchgrass. The Western Meadowlark breeds in dry grasslands and other open habitats from central British Columbia east to the Great Lakes and south to the high plateaus of north-central Mexico. Northern breeders migrate a relatively short distance to the southern parts of the breeding range and beyond to the Gulf States and central Mexico.

Distribution, Abundance, and Habitat In British Columbia, the Western Meadowlark breeds in interior grasslands and pastures from the Peace River area southwards. The distribution shown by Atlas data is similar to that shown in The Birds of British Columbia published in 2001. Breeding was confirmed at one location on the coast during the Atlas period; meadowlarks were last reported to breed on the coast in 1986 (Campbell et al. 2001). The northward expansion of meadowlarks from the Cariboo-Chilcotin Plateau into the Prince George area, and from central Alberta into the Peace River area, both in the last half of the 20th Century (Campbell et al. 2001) appears to have stabilized: the Atlas results show no further expansion in these areas, although there is some evidence of infilling with more reports from the upper Fraser River valley.

The Probability of Observation model and abundance data show that it is most common in the Southern Interior ecoprovince, matching the findings of The Birds of British Columbia published in 2001. It is most abundant in three biogeoclimatic zones: Ponderosa Pine, Bunchgrass and Interior Douglas-fir. The Western Meadowlark can be found up to 1,500 m elevation in clearcuts, but the vast majority of breeding territories are below 1,000 m, and most of those are between 500 and 750 m, likely reflecting the elevation of much of the interior plateaus where this species is common.

The Western Meadowlark is a consummate grassland species, requiring relatively large areas of grassland or pasture. Nests are placed on the ground, well hidden under a clump of grass.

Conservation and Recommendations Like all grassland bird species in North America, Western Meadowlark populations have declined significantly since the Breeding Bird Survey began monitoring populations in 1970. The species has lost more than half its Canadian population in that time period. The population trend in British Columbia is similar but slightly less steep than the national trend. The causes of this decline have not been directly studied, but are likely a combination of habitat loss and degradation, both on the breeding grounds in Canada and the wintering grounds in the United States and Mexico.