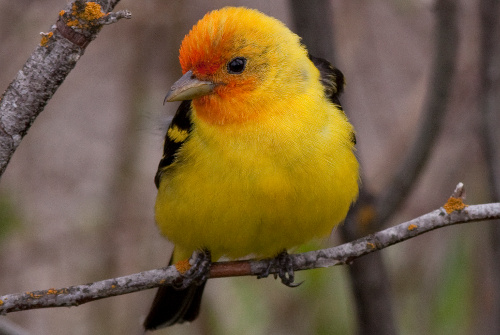 Characteristics and Range Formerly considered a true tanager in the family Thraupidae, recent genetic work has placed the Western Tanager within the cardinal-grosbeak (Cardinalidae) family (Klicka et al. 2007). The male's distinctive plumage includes a red face and head, which is notable because the pigment that causes this, rhodoxanthin, is derived from components of their diet, likely insects, unlike other Piranga tanagers (Hudon 1991). Its breeding range extends across much of western North America from the Boreal Forest south to Baja California. It is a medium-distance migrant, the winter range concentrated from southwestern Mexico to Costa Rica; small numbers winter in southern California (Hudon 1999).

Distribution, Abundance, and Habitat With a broad range across the entire province except Haida Gwaii, the overall pattern of distribution has changed little since The Birds of British Columbia was published in 2001, reflecting that it breeds wherever taller, coniferous or mixed forests are present, and it is more thinly distributed along the wet, outer coast.

The Probability of Observation model shows highest values in the valley systems of the interior and Coast Mountains, the Interior Plateau, Georgia Depression, and the northeast lowlands. Point counts refine this picture, showing highest abundance in the Southern Interior Ecoprovince (unchanged since Campbell et al. 2001), followed by the Coast and Mountains and Boreal Plains ecoprovinces.

Preferred broad habitats are river valleys below 1,250 m and within dry biogeoclimatic zones, particularly Interior Douglas-fir. Within these areas this species has a preference for open and edge habitat, such as open coniferous and mixed forests, riparian areas, and other forest types adjacent to natural and artificial clearings (Smith et al. 1997, Campbell et al. 2001, Stiles 1980). Overall, presence is more likely in older forests with taller canopy and less likely in forests with higher stand density (Schieck and Nietfeld 1995, Shy 1984).

Conservation and Recommendations Over recent decades populations have gone through remarkable swings, both positive and negative, however, current populations are slightly increased from those found 50 years ago (Sauer et al. 2014). Climate projections suggest that the extent of Interior Douglas-fir and Interior Cedar-Hemlock biogeoclimatic zones will increase over the next century (Hamann and Wang 2006, Flannigan and van Wagner 1990), which may benefit tanagers. Management of Douglas-fir (Psuedotsuga menziesii), Ponderosa Pine (Pinus ponderosa), and Lodgepole Pine (Pinus contorta) and associated forests may also impact Western Tanager populations due to the species close associations with these species (Hudon 1999).