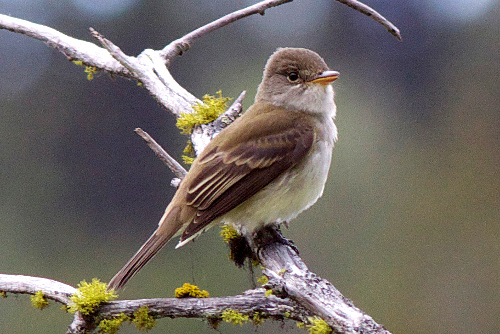 Characteristics and Range The Willow Flycatcher's emphatic song is a familiar summer sound across much of southern British Columbia, from late May through late July. It breeds in shrubby habitats across several biomes spanning much of central North America from Pacific to Atlantic coasts, south of and slightly overlapping the southern part of the breeding range of its very close relative the Alder Flycatcher. It is a shorter-distance migrant than the Alder Flycatcher, and winters farther north, in Central America and far northern South America.

Distribution, Abundance, and Habitat The Willow Flycatcher breeds throughout most of southern and south-central British Columbia, but becomes more sparsely distributed in the northern part of its range. Two subspecies are found in the province: E. t. brewsteri (west of the Coast and Cascade mountains) and E. t. adastus (east of these mountains). A comparison with The Birds of British Columbia published in 1997 suggests that there may have been some northward range expansion, with numerous Atlas records in the northern Central Interior and Sub-Boreal Interior ecoprovinces from Quesnel Lake to the south end of the Northern Rocky Mountain Trench. However, we know of some records from this area as far back as 1963 which were not included in Campbell et al. (1997), so it is uncertain whether this range expansion is real or only apparent.

The highest Probability of Observation and abundance for the Willow Flycatcher is in the Georgia Depression and adjacent southernmost Coast and Mountains ecoprovinces; Campbell et al. (1997) also considered the Georgia Depression to support the highest numbers. It is also numerous in the Southern Interior, part of the Southern Rocky Mountain Trench and the central Chilcotin Plateau. It is most common below 500 m altitude in the interior, and especially below 250 m in coastal areas.

Preferred habitat for this species is dense thickets of willows (Salix species), alders (Alnus species), and other deciduous shrubs or small trees, usually near water or in riparian areas. There are distinct differences in habitat preferences between the southern British Columbia interior and the south coast. On the coast, the species also frequently uses shrub thickets in regenerating cut blocks in dry, upland areas, which it generally does not do east of the Coast and Cascade mountains.