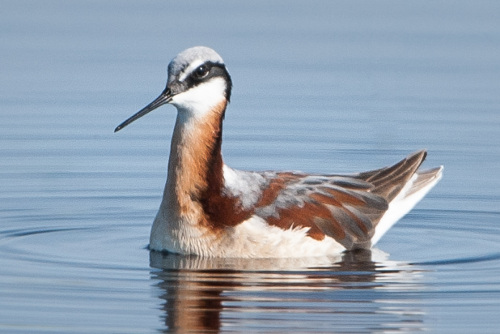 Characteristics and Range The Wilson's Phalarope is the largest of three species of phalarope, all of which exhibit dramatic reversed sexual dimorphism, the female being larger and more colourful than the male, and playing the lead role in courtship, with the male providing all of the parental care. The Wilson's Phalarope breeds across the interior of central-western North America from southeast Alaska and the Boreal Taiga Plains in the north-west, east to the Great Lakes and south to the southern Great Plains and Sierra Nevada. It is a very long-distance migrant, wintering in western and southern South America (Colwell and Jehl 1994).

Distribution, Abundance, and Habitat Although The Birds of British Columbia noted a northward range expansion during the 20th Century within British Columbia, and a range expansion was also noted in Alaska-Yukon (Colwell and Jehl 1994), Atlas data suggest a stabilization of that expansion rather than a continuing increase. The Atlas results tended to reconfirm breeding at previously known locations. The Atlas recorded possible breeding in the Georgia Depression, with multiple females chasing males; this courtship behavior is known to occur at migration stopovers. However, historically, breeding did occur at the Iona Island sewage ponds in the Fraser River delta (Campbell et al. 1990).

Best-known to British Columbian birders who visit shallow interior wetlands, the Wilson's Phalarope is nowhere an abundant bird provincially. This is reflected in the low Probabilities of Observation in even the areas of most likely occurrence. The highest probability of finding the species was along the lower sections of the Chilcotin and Thompson valleys. The Birds of British Columbia noted the centre of breeding abundance to be in the southern Okanagan, which may no longer be the case. Most Atlas records consisted of small groups of birds (up to three pairs per site).

The Wilson's Phalarope is a bird of shallow freshwater wetlands, flooded fields, and wet sedge meadows. It accepts some human-altered habitats, often nesting along the outer edges of lightly used paths, dikes and lanes next to wetlands, and in sewage farms with shallow ponds.

Conservation and Recommendations There are no major conservation concerns for this species in the province or more widely in Canada, where it shows a stable long-term population trend (Environment Canada 2011). Future atlassing will help clarify whether the range expansion during the 20th Century has stabilized. Further surveys might target the far northwest of British Columbia, adjacent to the recently established population in southeast Alaska.