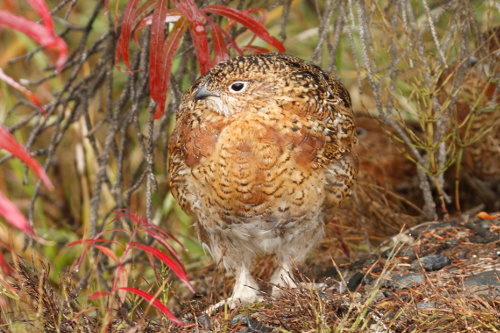 Characteristics and Range The Willow Ptarmigan, the largest and most numerous of the three species of ptarmigan, is a characteristic resident of arctic, subarctic, and subalpine tundra throughout the Northern Hemisphere. Plumage of both sexes varies similarly throughout the year such that it blends with dominant colours of the surrounding environment. All ptarmigan have feathered feet that improve their ability to walk in snow. In North America, it breeds in arctic, subarctic, and subalpine tundra across the continent and southward in alpine tundra in western Canada (Hannon et al. 1998). It also breeds across Eurasia on tundra, moors, heaths, and bogs within arctic, subarctic, and boreal zones and southward marginally into temperate areas. It is an altitudinal and short-distance migrant; some populations move short distances south of the breeding range in winter.

Distribution, Abundance, and Habitat The Willow Ptarmigan breeds in mountains and high plateaus in the northern half of British Columbia, particularly in the Northern Boreal Mountains Ecoprovince, and at scattered locations in the Sub-Boreal Interior and Central Interior ecoprovinces fringing the interior plateaus. The Atlas surveys found this ptarmigan at 870-1,410 m in the Northern Boreal Mountains Ecoprovince, but at higher elevations (1,730-2,160 m) farther south in the Central Interior Ecoprovince. The distribution from the Atlas records is similar to that reported by Campbell et al. (1990).

The mean Probability of Observation was highest in the Northern Boreal Mountains Ecoprovince, followed by the Sub-Boreal Interior and Central Interior ecoprovinces. Numbers of breeding individuals fluctuate annually and vary geographically; periods between cyclic peaks range from 10 to 11 years in British Columbia (Hannon et al. 1998).

The Willow Ptarmigan prefers to breed in subalpine and alpine habitats, normally just above treeline, especially low, moist areas and shrubby habitats where willow or birch shrubs are abundant; it avoids dry, rocky areas. Most Atlas records are in the Spruce-Willow-Birch and Boreal Altai Fescue Alpine biogeoclimatic zones.

Conservation and Recommendations The long-term trend in population numbers appears to be stable, but monitoring data are sparse. The Willow Ptarmigan faces threats from direct and indirect effects of disturbances such as industrial developments and recreational activities. Threats from development may be locally significant but are unlikely to result in widespread declines if the majority of the range remains remote and undeveloped (Environment Canada 2011, Hannon et al. 1998). Climate change is a concern for ptarmigan, but the potential effects are unclear; range may be lost in some areas because of change in treeline, but an increase in the abundance of shrub habitats may be a benefit in other areas.