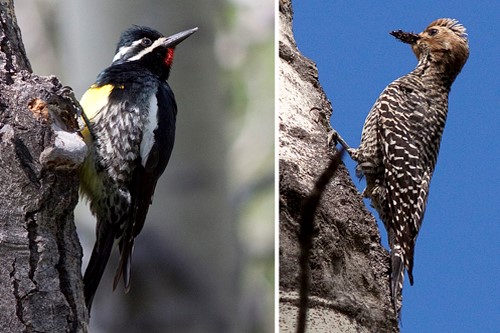 Characteristics and Range Male and female Williamson's Sapsuckers are so strikingly different in appearance that for 23 years they were named as separate species, until a nesting pair was documented (Henshaw 1874). The Williamson's Sapsucker inhabits the mountainous areas of western North America. It is a migrant woodpecker, breeding from southern British Columbia south to the mountains of northern Baja Peninsula, and spending the winter in the cordilleras of the southwestern United States, the Mexican Sierra Madre and northern Baja California (Gyug et al. 2012).

Distribution, Abundance, and Habitat The Williamson's Sapsucker breeds in three separate areas in southern British Columbia: the northern Cascade Mountains; the plateau connecting the Okanagan and Boundary regions in the Southern Interior Ecoprovince; and the southern Purcell Mountains in the Southern Interior Mountains Ecoprovince. The breeding range has expanded since The Birds of British Columbia was published in 1990, due to a combination of greater search effort from provincial surveys and Atlas work, and a true range expansion in both the Kootenay and Thompson-Okanagan regions. The species is now found further to the west and north along the Fraser and Thompson Rivers (COSEWIC 2005, Gyug et al. 2012), and the East Kootenay population that was thought to have been extirpated (Campbell et al. 1990) actually hung on as a very rare breeder (Gyug et al. 2012), and has since re-built, with breeding confirmed in twelve 10-km squares and suspected in another seven. COSEWIC (2005) estimated the population size at 430 mature individuals in 2004; that number has likely increased.

Most point count records came from the Southern Interior Ecoprovince, but too few data are available to draw firm conclusions on abundance. Probability of Observation mapping suggests little difference in detection rates between the three areas where Williamson's Sapsuckers now occur.

In British Columbia, the Williamson's Sapsucker breeds in montane coniferous forests that typically have components of live, mature Western Larch (Larix occidentalis) that are important for nesting, sap well creation, and as a source of carpenter ants (Camponotus species), a preferred prey. Atlas data show records between 740 and 1,570 m elevation. In some areas, particularly in the western part of its provincial range, it will also nest in groves of Trembling Aspen (Populus tremuloides) (Campbell et al. 1990; COSEWIC 2005).

Conservation and Recommendations In addition to provisions under the federal Species at Risk Act (COSEWIC 2005), the Williamson's Sapsucker is afforded some protection under the British Columbia Forest and Range Practices Act, with several Wildlife Management Areas setting aside habitat for the species. Although the provincial range of the Williamson's Sapsucker has increased slightly, the habitat the species depends upon, mature and old montane forests, is in decline primarily due to forestry activities and firewood collection that target these forest types, particularly those containing Western Larch (COSEWIC 2005). A provincial Recovery Plan has been developed that protects Crown land in high quality habitat areas and implements live tree stem retention in core nesting areas (British Columbia Ministry of Environment 2012). Annual inventory surveys and monitoring of known nests may be beneficial in determining the effectiveness of the current Recovery Strategy and whether or not any modifications will be necessary. Birders can help document any further range changes by reporting sightings to programs like eBird and the Conservation Data Centre.