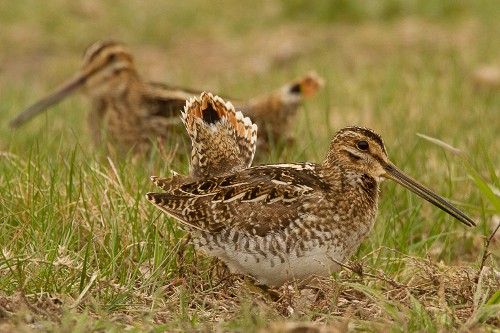 Characteristics and Range The Wilson's Snipe is one of North America's most numerous shorebirds, but cryptic plumage and generally elusive behaviour combine to make it a difficult bird to see. In the breeding season, it performs a unique, spectacular territorial flight, giving away its presence with a rather haunting winnowing sound, made by the rapid vibration of its outer tail feathers as it dives through the air. It breeds across taiga, boreal, prairie and western montane regions of North America, migrating medium to long distances south to winter across the southern half of the continent, Central and northern South America. Always associated with wet or damp habitats, it is named for its long bill (snipe is derived from "snite", an old form of the word snout), which has sensory pits near the tip to detect prey when probing in mud (Mueller 1999).

Distribution, Abundance, and Habitat The Wilson's Snipe is widely distributed across northern and interior British Columbia east of the Coast Mountains, and more sparsely distributed in lowland coastal regions. Its range across the province has not changed since The Birds of British Columbia was published in 1990, but the Atlas surveys have greatly filled in the known breeding season distribution.

The Probability of Observation model indicates the most likely places to find it are on the wetland-studded plateaus of the Central and Sub-Boreal Interior ecoprovinces, and in the Fort Nelson and Liard river lowlands of the Taiga Plains Ecoprovince. However, abundance data from point counts indicate that abundance is relatively even across most regions, being slightly higher in the Central Interior (especially in the Sub-Boreal Pine-Spruce biogeoclimatic zone) and Northern Boreal Mountains. This is similar to the pattern noted in Campbell et al. (1990), who considered it most numerous in the central and southern interior, noting that it was widespread across the northern Boreal Forest. Snipe are most common between 500 and 1,250 m, the elevation range of their favoured interior plateaus and northeastern lowlands.

Conservation and Recommendations Population trends for the Wilson's Snipe are largely stable, and there are no major conservation concerns. There is still some limited hunting pressure, but much less than in the past, so this has at most a very local effect (Environment Canada 2011).