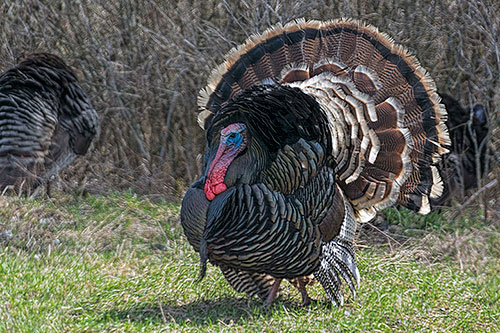 Characteristics and Range The Wild Turkey is the world's heaviest gallinaceous bird with adult males reaching weights of over 10 kg. Its large size, long legs and neck, featherless head, wattle, and beard make it easily distinguishable from other birds in its range. During the day turkeys spend most of their time on the ground, often in large flocks; at night they fly into trees to roost. The Wild Turkey is native only to southwestern and eastern North America, but has been successfully introduced for hunting to many other parts of the United States and Canada, Europe, and New Zealand (McRoberts et al. 2014). The Wild Turkeys in British Columbia are of the subspecies M. g. merriami (Campbell et al. 1990).

Distribution, Abundance, and Habitat Following attempts at introduction to British Columbia in 1910, and expansion into British Columbia from populations introduced to neighbouring U.S. states in the 1960's, the Wild Turkey was largely restricted to the southern Kootenays, with smaller populations in the Okanagan region and on southeastern Vancouver Island (Campbell et al. 1990). Since The Birds of British Columbia was published in 1990, the Wild Turkey has expanded its range and now occurs throughout the valleys of the East and West Kootenay and southeast Okanagan regions. Whilst atlassers did not report sightings from southern Vancouver Island and the Gulf Islands, the continued existence there of remnant populations from past (and possibly recent) introductions was evidenced by observations made by and reported to provincial biologists (M. Chutter pers. Obs.). An outlying, confirmed breeding observation in the Peace River lowlands is the result of a local introduction initiative by turkey hunting enthusiasts.

The Wild Turkey population in British Columbia was estimated to be 4,000-5,000 birds in 2004 (Wahl 2004). It has likely increased since then, having expanded extensively northwards in the Kootenays, and west to the edge of the south Okanagan Valley. The highest Probability of Observation values are in the major valley systems in the south of the Southern Interior and Southern Interior Mountains ecoprovinces. Too few records are available from point counts to indicate any patterns of abundance.

The Wild Turkey prefers open mature forested areas. Nesting and summer habitats include scattered forest openings, agricultural fields and grazing ranges. Turkeys nest on the ground, often at the base of trees, in areas that provide some form of horizontal cover.

Conservation and Recommendations As an alien species, the Wild Turkey has no provincial status designation. Due to agricultural depredation complaints and potential competition with native upland game birds, the British Columbia Wildlife Branch has ceased all introductions and translocations to Crown land; however, captive-bred Wild Turkeys can still be released on private lands for hunting or agricultural purposes. Open hunting seasons exist in the Kootenay and Okanagan regions. The Province of British Columbia should continue to monitor the spread of Wild Turkeys in the province, and consider research into potential competition with native species.