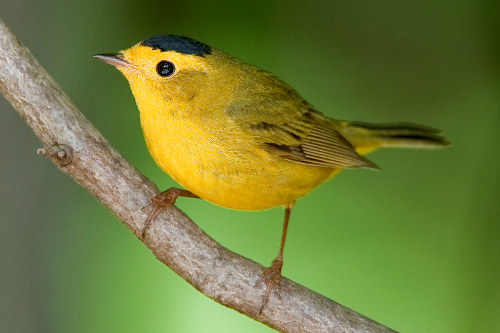 Characteristics and Range Named after naturalist Alexander Wilson, the bright yellow Wilson's Warbler is known to British Columbia birders as a common summer visitor and a widespread migrant throughout the province. This species breeds across the boreal forests of North America and south through subalpine forests of the Rocky Mountains and Sierra Nevada. It is a long distance migrant, wintering mainly in southern Mexico and Central America (Ammon and Gilbert 1999).

Distribution, Abundance, and Habitat The Wilson's Warbler is widespread across the entire province. Its distribution does not appear to have changed since The Birds of British Columbia was published in 2001, but the Atlas records filled in breeding distribution gaps and significantly increased the number of confirmed breeding occurrences generally throughout British Columbia.

The Atlas results show that the most extensive areas of highest Probability of Observation are in the Rocky, Omineca and Cassiar mountains of the Northern Boreal Mountains, Sub-boreal Interior and Southern Interior Mountains ecoprovinces. These areas also support the highest abundances on point counts, along with a less extensive area of high abundance and Pobs values along the west coast of Vancouver Island and in the Georgia Depression. It is most abundant in the Northern Boreal Mountains, where Campbell et al. (2001) considered it to be most numerous. The Wilson's Warbler is one of the most common warblers in the province, reaching highest abundance in two discrete habitat-elevation bands: in moist lowland forests along the coast below 250 m, and in shrubby areas of montane, subalpine and boreal forests between 1,250 m and 1,750 m in the interior.

The Wilson's Warbler is a bird of shrubbery, both in the dense understory of coastal forests as well as the middle and high elevation forests on interior mountains. It usually nests near water. These finer scale habitat features are more important than broad habitat types in determining its distribution and abundance, as illustrated by high abundance and Pobs values recorded for a wide range of biogeoclimatic zones.

Conservation and Recommendations There are no conservation concerns. Populations of Wilson's Warbler are very large, and appear to be stable across British Columbia (but possibly declining Canada-wide) based on long-term Breeding Bird Survey trend data, and the species adapts well to shrub regeneration following clear-cutting (Lance and Phinney 2001, Wahl et al. 2005). Local losses of Wilson's Warblers are incurred by riparian habitat degradation through livestock grazing.