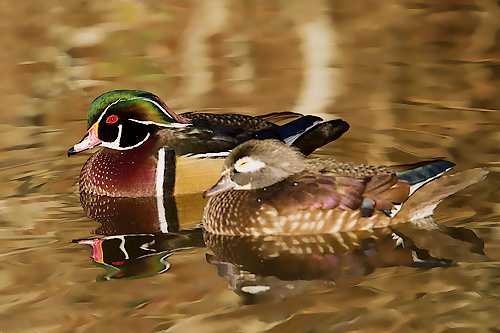 Characteristics and Range The male Wood Duck is one of the most ornately-plumaged waterfowl in the world, but it can also be one of the least conspicuous. Its native range is restricted to North America, where it is a resident and partial migrant in wooded areas of the continent from southern Canada to the Caribbean; introduced populations exist in other parts of the world. The Wood Duck's slender body and large eyes are adaptations to woodland habitats and the tree cavities that it uses for nesting. Its inconspicuous habits contributed to a fear among many ornithologists that it would go extinct during the 20th Century as a result of urban expansion, habitat loss and overharvesting. Effective management under the Migratory Bird Convention Act enabled the population to quickly rebound, and it continues to fare well today (Hepp and Bellrose 2013).

Distribution, Abundance, and Habitat This duck breeds most widely in the wooded valleys and floodplains of southern British Columbia. The range expansion in British Columbia noted during the 1980s (Hepp and Bellrose 2013) has continued northwards to the north end of the Southern Rocky Mountain Trench, the Nechako Plateau, and to the Skeena and probably the Nass rivers. Birds have been breeding along the Skeena River since the early 1990s (Stockner 2013). The Atlas also confirmed breeding, perhaps for the first time, on northern Vancouver Island.

The concentration of breeding records throughout the Georgia Depression ecoprovince is refined by the Probability of Observation model, which highlights the lower Fraser River valley as the centre of abundance, as was the case 35 years ago (Campbell et al. 1990). Similarly high Pobs values along the Squamish and upper Lillooet rivers, and stretches of the Columbia and Kootenay rivers indicate these valley systems are also important for the species. Most breeding is at elevations below 500 m.

Favoured breeding habitat is riparian or mature deciduous woodland adjacent to a variety of freshwater and brackish wetlands, especially sloughs and slow-flowing rivers. The Wood Duck is a secondary cavity-nester that chooses Pileated Woodpecker holes for nesting, and readily uses artificial nest boxes.

Conservation and Recommendations There are no conservation concerns. In several parts of British Columbia, populations have established or grown substantially through nest box programs (Campbell et al. 1990). Maintenance of nest boxes is therefore important to Wood Duck populations in some areas.