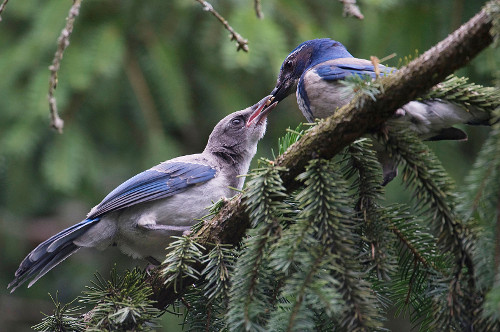 Characteristics and Range The Western Scrub-Jay is the familiar jay of drier woodland and open habitats of the "American West", from the Columbia River to the eastern Rocky Mountains, and south to the arid regions of Mexico. It is one of four scrub-jays in North America, and shows sufficient variation in structure, plumage and behaviour that splitting the Western Scrub-Jay into three species may be justified (Curry et al. 2002). During the latter part of the 20th Century a linear northward range expansion has occurred in Washington State (Wahl et al. 2005), from just north of the Columbia River to Puget Sound, perhaps related to increased residential development at low elevations (Smith et al. 1997). There has also been a distinct increase in the number of records in southern British Columbia, especially during non-breeding periods since 2000 in the lower Fraser Valley (Toochin 2014).

Distribution, Abundance, and Habitat There are four breeding season (April-August) records of the species for the Atlas period, of single birds in possible breeding habitat in the lower Fraser River valley: in Maple Ridge from 2009-2011, in the Campbell Valley (South Langley) in 2010, just west of Cultus Lake in 2011, and at Bridal Falls in 2012 (Toochin 2014). In 2013, just one year after Atlas fieldwork concluded, a pair bred in Maple Ridge, but the young were predated before they fledged the nest; in 2014, the same pair re-nested in a tall cedar hedge in suburban gardens and successfully fledged two young, the first breeding record for British Columbia and Canada (Gordon 2014, Toochin 2014).

In the southern part of its range the Western Scrub-Jay is a bird of drier landscapes, from arid scrub to open woodlands, but it has adapted well to suburban environments, the habitats where most birds are being recorded in southwestern British Columbia.

Conservation and Recommendations Birders should continue to monitor whether the northward expansion continues, by submitting data to programs like eBird.