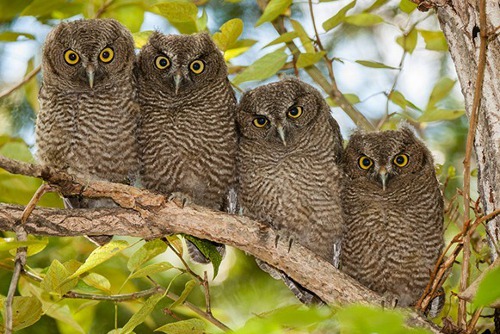 Characteristics and Range The Western Screech-Owl is a smallish owl that calls with repeated hollow whistles, not screeches. Its larger size and yellow eyes set it apart from the Flammulated Owl. A generalist predator, it feeds on almost any small animal. The species is resident from the coast of southern Alaska and the valleys of the southern interior of British Columbia south in mountainous western North America to central Mexico. It was formerly considered conspecific with the Eastern Screech-Owl, but different vocalizations and subtly different physical characteristics resulted in the recognition of two distinct species. There are two subspecies in British Columbia: M. k. kennicottii on the coast (brownish grey, occasionally very reddish brown) and the somewhat larger M. k. macfarlanei (distinctly greyish) in valleys of southern British Columbia east of the Coast and Cascade mountains.

Distribution, Abundance, and Habitat Western Screech-Owls are found below about 1,000 m in forests along the coast in the Georgia Depression and Coast and Mountains ecoprovinces (except Haida Gwaii) and in the valleys of the Southern Interior and Southern Interior Mountains ecoprovinces. They are found in both the Coastal Douglas-fir and Coastal Western Hemlock biogeoclimatic zones on the coast; interior birds are found in the Bunchgrass, Ponderosa Pine, Interior Douglas-fir and Interior Cedar-Hemlock zones. The Atlas indicates a broader distribution in the interior (particularly along the Fraser River and adjacent valleys near Lillooet, the southern portions of the Kootenay and Columbia valleys, and the Flathead River valley) and a contraction of range on the coast (particularly in the lower Fraser River valley and southeastern Vancouver Island) when compared with the distribution shown in The Birds of British Columbia published in 1990. For the interior range, this reflects the significant increase in inventory effort for the interior subspecies in the past decade, while the change on the coast probably reflects a real decrease there since the 1990s.

Most Atlas data came from targeted surveys in certain areas, so it is difficult to assess the abundance of the species across the province. The interior population is estimated to be 350-500 adult birds, while that on the coast is thought to number less than 10,000 adults (COSEWIC 2012).

Western Screech-Owls use a wide variety of wooded and forested habitats, but clearly favour riparian woodlands over most of their range (Cannings and Angell 2001). On the British Columbia coast, territories are often centred on stream courses lined with Bigleaf Maple (Acer macrophyllum), while in the interior, screech-owls are strongly tied to riparian woodlands dominated by Black Cottonwood (Populus trichocarpa), Water Birch (Betula occidentalis) and Trembling Aspen (Populus tremuloides).

Conservation and Recommendations The small population of the interior subspecies and historic loss of riparian habitat led to it being listed as Endangered under the federal Species at Risk Act; subsequent inventory effort greatly increased the known range and population there, resulting in a down-listing to Threatened (COSEWIC 2012). South coastal populations have decreased dramatically since the 1990s, perhaps as a result of predation by the expanding Barred Owl; that subspecies was initially listed as Special Concern under the Species at Risk Act; but was uplisted to Threatened because of those population declines (COSEWIC 2012). Continued inventory of screech-owls is needed, especially on the central and northern coast where the species is poorly known.