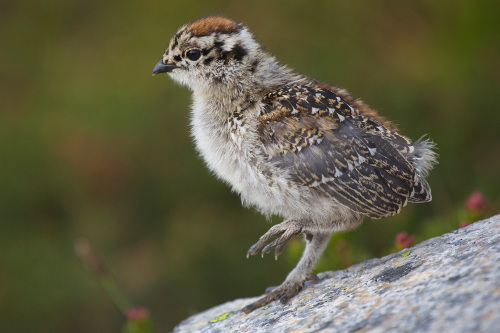 Characteristics and Range This smallest of the three ptarmigan that occur in North America, it is also distinguishable from the others in flight by its distinctive white tail feathers. The White-tailed Ptarmigan is found only in alpine habitats of western North America, where it is resident from Alaska and Yukon south through the mountains of British Columbia, including patchily through the southern Rocky Mountains (Braun et al. 1993). The isolated subspecies L. l. saxatilis is endemic to Vancouver Island (Campbell et al. 1990, Braun et al. 1993).

Distribution, Abundance, and Habitat The White-tailed Ptarmigan has the widest distribution of all ptarmigan in British Columbia and is a rare to common resident throughout mountainous regions (Campbell et al. 1990). It is much more widespread in the southern half of British Columbia than the other two species of ptarmigan, with clusters of records in the East and West Kootenay ranges, and the Cascade, southern Coast and Vancouver Island mountains. Breeding is from 1,280-1,450 m on Vancouver Island and from 1,830-2,650 m in the interior (Campbell et al. 1990).

Three ecoprovinces support separate extensive areas of higher Probability of Observation: the Northern Boreal Mountains, the Coast and Mountains, and the Southern Interior Mountains. The highest PObs values are in the three alpine and, in coastal regions, the Mountain Hemlock biogeoclimatic zones.

The White-tailed Ptarmigan is strictly alpine, breeding at or above timberline and preferring rocky areas, krummholz, moist vegetation near snowfields and streams, and willow-dominated plant communities.

Conservation and Recommendations The Province of British Columbia has a high global responsibility for the conservation of White-tailed Ptarmigan because the province constitutes a large portion of the species range. Climate change may negatively affect the White-tailed Ptarmigan nesting habitat if treelines continue to rise, but little is known of the species' population trends (NABCI-Canada 2012).

The subspecies L. l. saxatilis is Blue-listed in British Columbia, due to its small population size and its local distribution within a restricted range (British Columbia Conservation Data Centre 2014); it is limited to higher elevations (above 820 m) on Vancouver Island. It is vulnerable to population extinction processes (Martin et al. 2000) and its habitat is threatened by recreational conflicts, air and ground-based pollutants, forest harvesting, and climate change (Martin and Forbes 2001, 2004). Some specific management recommendations for L. l. saxatilis are presented by Martin and Forbes (2004).