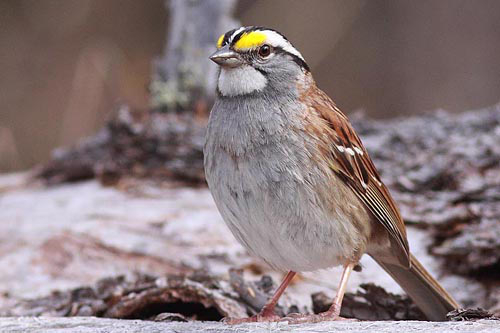 Characteristics and Range A familiar bird for many Canadians, the clear, whistled song of the White-throated Sparrow is recognized by nearly anyone who has spent time in the northern forests during summer. It is one of the most-studied songbirds of North America. The White-throated Sparrow occurs in two colour morphs: one with white head stripes, the other with tan stripes. Males and females are represented equally in each morph, and both morphs occur equally across the species' breeding range. Interestingly, each morph tends to mate with its opposite: a male white-striped with a female tan-striped, or vice-versa; same-morph pairs are relatively rare (Falls and Kopachena 2010). The White-throated Sparrow breeds in boreal and northern temperate forests from the Atlantic Coast westward to the Rocky Mountains and central British Columbia. It winters primarily in the eastern United States, but some winter in a separate range along the Pacific Coast of the United States.

Distribution, Abundance, and Habitat Within British Columbia, the species breeds mainly east of the Rocky Mountains in the Boreal Plains and Taiga Plains ecoprovinces. However, a significant range expansion into central British Columbia began in the late 1940s (Campbell et al. 2001). This trend has continued even since The Birds of British Columbia was published in 2001. West of the Rockies, the White-throated Sparrow now breeds throughout the central part of the province, west to the Bulkley Valley, south to the Cariboo Plateau and through the Robson Valley, and northwest along the upper reaches of the Liard River.

The White-throated Sparrow is a widespread and locally very common bird across much of northeastern British Columbia. The highest modelled Probability of Observation values are in the Taiga Plains Ecoprovince, near the Liard and Fort Nelson rivers' confluence. However, Atlas point count data show that it is most abundant in the Boreal Plains Ecoprovince; Campbell et al. (2001) state that it is commonest in both the Taiga Plains and Boreal Plains ecoprovinces.

In British Columbia the White-throated Sparrow is closely associated with Trembling Aspen (Populus tremuloides) forest, especially in older, open forest with a brushy understory, in recent cutovers or burns with similar low, brushy habitat, and along open forest edges. The species is also found in lower densities in other deciduous and mixedwood forests as long as brushy understory is present. Dense coniferous forest is typically avoided. This is similar to the habitat used elsewhere in the western parts of its range, but contrasts somewhat with habitat in the east, where conifer-dominated forest is preferred. Brushy habitat and forest edges are used throughout its range (Falls and Kopachena 2010). In British Columbia, the White-throated Sparrow is mainly found between 250 and 1,000 m, and is most abundant at the lower end of this range.

Conservation and Recommendations The White-throated Sparrow is not of conservation concern in British Columbia. In fact, long-term Breeding Bird Survey results show an increasing trend for the province, consistent with the documented range expansion in recent decades. British Columbians will become increasingly familiar with this attractive sparrow as it continues to spread across the province.