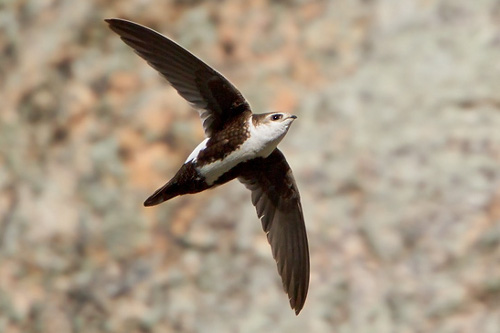 Characteristics and Range The White-throated Swift lives up to its "swift" epithet, streaking across the clear blue skies of interior valleys, dashing at high speeds into nesting crevices in massive rock bluffs. It is usually first detected by its loud, chattering calls, and when seen identification can be confirmed by the white throat and swept-back, sickle-shaped wings that distinguish it from the Violet-green Swallows it often keeps company with. This swift breeds from drier valleys in the southern interior of British Columbia and south through the Mexican Sierra Madre, and winters from the southwestern deserts of the United States through northern Central America.

Distribution, Abundance, and Habitat The White-throated Swift breeds from the Chilcotin and Clearwater rivers south through the Central Interior, Southern Interior and Southern Interior Mountains ecoprovinces. Within those regions, it is found in the Bunchgrass, Ponderosa Pine, Interior Douglas-fir and Interior Cedar-Hemlock biogeoclimatic zones. The distribution found during the Atlas project is similar to that known when The Birds of British Columbia was published in 1990, except that the Atlas documents a northern range expansion up the North Thompson River into the Clearwater River drainage, a breeding site in the Slocan Valley, and a slightly more expanded range up the Chilcotin River valley. Atlas records range up to 1,250 m elevation, but most are below 750 m.

The provincial population of White-throated Swifts is unknown, although Richardson (2000) estimated the Okanagan Valley breeding population (arguably a good proportion of the provincial population, as suggested by the Probability of Observation model) to be approximately 750 birds. The species is a relatively new arrival in British Columbia; it was first recorded in 1907 at Vaseux Lake and has spread north slowly but continually since then (Cannings et al. 1987, Campbell et al. 1990).

White-throated Swifts are closely associated with rock and silt cliffs with suitable crevices for nesting; aerial foraging occurs over a variety of habitats near these features (Ryan and Collins 2000).

Conservation and Recommendations An expanding range over the last century indicated that the species was secure, however, recent declines for a suite of aerial insectivores, including this species in British Columbia, resulted in the White-throated Swift being placed on the British Columbia Blue List in 2015. Richardson (2000) investigated the impact that rock-climbers might have on the breeding success of the species at popular climbing sites in the Okanagan Valley and found no adverse effects. The swifts' breeding cliffs are by their very nature rather free from other threats of habitat loss.