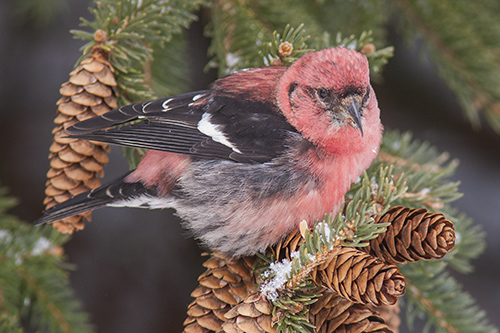 Characteristics and Range Crossed mandibles and white wing bars distinguish this species from all other North American birds. The White-winged Crossbill has a circumpolar breeding distribution in northern and montane coniferous forests; it occurs across northern North America from the Pacific to Atlantic coasts, extending south into the central Rocky Mountains (Benkman 2012). It sporadically makes nomadic and irruptive movements linked to food availability and can be found south of the normal breeding range. Like other crossbills, this species is specialized for foraging on seeds in conifer cones, using its crossed mandibles to wedge open cone scales and lift the seeds free with its tongue.

Distribution, Abundance, and Habitat The White-winged Crossbill breeds throughout much of interior British Columbia, especially in the northern half of the province. Campbell et al. (2001) noted that the true breeding distribution is somewhat of an enigma but that it probably breeds where it regularly occurs, and may occasionally nest on the coast. The Atlas greatly increased the confirmed and probable breeding range in the northern half of the province, likely due to increased effort. Atlas data also confirmed breeding on Vancouver Island at high elevation, and recorded other coastal observations only in 2008, suggesting that some local and ephemeral nesting does occur on the southern British Columbia coast.

Highest Probability of Observation is in the Fort Nelson River lowlands of the Taiga Plains, with moderate-high PObs values in the Northern Boreal Mountains and the Sub-Boreal Interior ecoprovinces. These areas also support the highest abundance, especially at elevations below 750 m, in the spruce-dominated biogeoclimatic zones. This result contrasts dramatically with The Birds of British Columbia, which considered the highest abundance to be in the Southern Interior Mountains Ecoprovince, and is likely due to increased systematic surveying by the Atlas in the northern half of British Columbia, and irruptive movements skewing the picture. Centres of abundance for Red and White-winged Crossbills were well segregated during the Atlas, with the Red Crossbill most common in coastal and central-southern regions of the province. The White-winged Crossbill has a smaller bill than that of the Red Crossbill, adapted for feeding on different conifer seeds, which may help explain this difference.

The critical factor influencing breeding in any given year is conifer seed availability, not the detailed characteristics of the habitat. Breeding can occur throughout most of the year with adequate food availability, so the Atlas survey peak in June may have been mismatched to peak White-winged Crossbill song periods. Confirmed breeding only involved the observation of fledged young, which can travel with larger flocks away from the immediate nesting site. Most breeding is below approximately 1,000 m in northern British Columbia, and above 1,000 m in the southern interior of the province, matching the distribution of most spruce (Picea) species.

Conservation and Recommendations Habitat area and quality may decline substantially for White-winged Crossbills if logging rotations are shortened, because younger conifers produce fewer cones (Benkman 2012). Although the impact on populations of White-winged Crossbills is unknown, collisions with moving trucks and automobiles occur during winter because they are attracted to roads by exposed sand and salt.