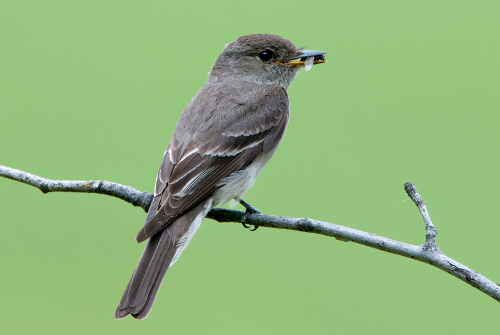 Characteristics and Range The Western Wood-Pewee is generally more numerous with less specific habitat requirements than its congener the Olive-sided Flycatcher. It breeds in western North America from the Boreal Forest south through the western Great Plains and cordilleras to Central America, and winters from Panama through northern South America to Bolivia.

Distribution, Abundance, and Habitat This species breeds throughout most of British Columbia (except for Haida Gwaii, where it is absent), but appears to be quite localized in wet coastal forests. The distribution has not changed appreciably from that shown in Campbell et al. (1997). Two subspecies are generally recognized in British Columbia: C. s. saturatus, found in coastal regions and the adjacent Coast and Cascade mountains, and C. s. veliei found to the east. However, Godfrey (1986) casts some doubt on the validity of these two subspecies.

The Probability of Observation model indicates the areas where the species is most likely to be found are the Central Interior, Sub-Boreal Interior, and in valleys of the Southern Interior ecoprovinces. Point count data suggest these regions also support the highest abundance, in the Sub-Boreal Spruce and Sub-Boreal Pine-Spruce biogeoclimatic zones in the Central Interior and Sub-Boreal Interior, and in the Interior Douglas-fir and Ponderosa Pine biogeoclimatic zones in the Southern Interior. Campbell et al. (1997) considered it was most numerous in the Sub-Boreal Interior. It is much less common in coastal areas and on Vancouver Island, and in the Peace River lowlands in the northeast, where the Pobs model shows a relatively high likelihood of finding it.

The Western Wood-Pewee occupies a wide variety of forested habitats, usually preferring open over denser canopies. Unlike the Olive-sided Flycatcher, which tends to prefer higher altitudes, it is at home in riparian Black Cottonwood (Populus trichocarpa) stands, Trembling Aspen (Populus tremuloides) groves, and open Ponderosa Pine (Pinus ponderosa) forest. The maximum altitude recorded for this species was 1,750 m, versus 2,670 m for the Olive-sided, and the wood-pewee's preference for lower and middle altitudes is evident in all parts of the province, with highest abundance recorded between 500 and 1,000 m.

Conservation and Recommendations The Western Wood-Pewee has shown a significant long-term decline throughout its North American range (Sauer et al. 2014), as have many species of aerial insectivores (NABCI-Canada 2012). The cause of the decline may include habitat loss and degradation on wintering and breeding grounds as a result of development, forestry and agriculture. However, it has not yet been identified as a species of concern by any governmental agencies.