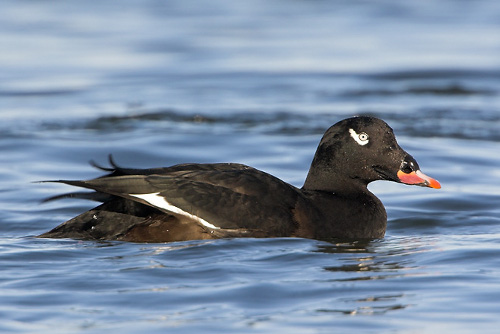 Characteristics and Range Both sexes of the White-winged Scoter show the distinctive white secondary feathers which give the species, the largest of the scoters, its name. It breeds mainly in the Canadian Prairies and western boreal to interior Alaska (Brown and Frederickson 1997, Sea Duck Joint Venture 2015). It also breeds across northern Eurasia; some authorities regard the North American (M. f. deglandi), Asian (M. f. stejnegeri) and European (M. f. fusca) subspecies as separate species (BirdLife International 2015). North American birds overwinter on both Atlantic and Pacific coasts. Common along the British Columbia coast in winter, relatively few remain in the province to breed. Birds fitted with satellite tags while wintering in British Columbia dispersed widely across northwestern Canada to breed (Sea Duck Joint Venture 2015).

Distribution, Abundance, and Habitat Breeding occurs only in the interior, with sparse clusters in the Boreal Plains and Central Interior ecoprovinces. Atlas data are insufficient to model Probabilities of Observation. Atlassing yielded only one confirmed record of breeding (fledged young on 30 July 2009 in the upper Liard River watershed). Because this is a late-migrating species and pairing may occur before or during migration (Brown and Frederickson 1997), some pairs noted here as probable breeders might have been en route to breeding grounds outside the province. Campbell et al. (1990) reported at least 90 confirmed breeding records (88 broods and two nests). Although the years of coverage in these two data sets are not comparable, the search effort during the Atlas was sufficient to provide matching numbers of confirmed breeding if the population was stable. In summary, although the breeding range in British Columbia has not changed much since the 1980s, the breeding population in the province might have declined.

Conservation and Recommendations Given the paucity of confirmed or probable breeding in 2008-2012 despite considerable effort, the estimate of 17,000 breeding birds in British Columbia (Campbell et al. 1990) needs to be re-assessed. The evidence suggests a far smaller breeding population, probably well below 10,000 birds. Continental abundance of White-winged Scoters has declined over the past four decades, based on aerial surveys covering most of the breeding range, although these surveys combine scoter species making rigorous analysis impossible (Fast et al. 2011, CWS Waterfowl Committee 2013, Sea Duck Joint Venture 2015). These data show some recovery of scoter numbers in the 2000s. Causes of declines are not known but might be factors that affect adult survival or breeding productivity (Brown and Frederickson 1997, BirdLife International 2015). Future atlassing and repeated surveys focused on confirmed, probable and possible sites identified in the Atlas will give valuable information on population trends in the province.