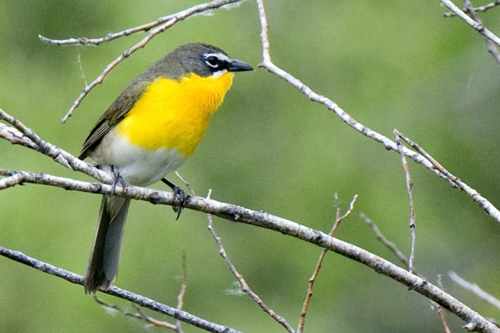 Characteristics and Range The Yellow-breasted Chat is more often heard than seen, its loud cackles and whistles emerging from rose and willow thickets. A lucky observer might see a male launch into a song flight, catching a glimpse of its bright yellow breast before it descends into the tangles again. The chat has also been a mystery to taxonomists; long considered the largest member of the wood-warbler family, its placement in avian family trees is now uncertain.

Yellow breasted Chats breed from the dry valleys of southern British Columbia, the southern Canadian Prairies and the Carolinian forests of Ontario south to the Gulf of Mexico and the southwestern deserts of the United States, and winter in coastal Mexico and throughout Central America. There are two subspecies recognized: the eastern I. v. virens, which nests in second growth shrubbery; and the western I. v. auricollis, which nests in riparian thickets in the dry valleys of the West.

Distribution, Abundance, and Habitat In British Columbia, the Yellow-breasted Chat is largely restricted to the south Okanagan Valley and the adjacent lower Similkameen Valley, with local breeding sites to the east along the Kettle River (all in the Southern Interior ecoprovince) and at the confluence of the Pend Oreille and Columbia rivers (Southern Interior Mountains ecoprovince). There are irregular breeding sites elsewhere; during the Atlas territorial chats were recorded in the Georgia Depression ecoprovince at Hope and Victoria. The Pend Oreille site has come to light relatively recently and was not known when The Birds of British Columbia was published in 2001, but that publication shows many other irregular sites, including a breeding record from the north Okanagan Valley (Campbell et al. 2001).

The British Columbia population has been estimated at 152 pairs (COSEWIC 2011). Atlas data are too few to generate a Probability of Observation model, but it is clear that the Yellow-breasted Chat is easiest to find in the Southern Interior ecoprovince, as was also noted in The Birds of British Columbia. Confirmed breeding locations ranged from 280 to 630 m elevation.

Conservation and Recommendations The small British Columbia breeding population has likely declined from historical levels, but is now considered stable or increasing due to protection and enhancement of riparian habitats in the Okanagan Valley (COSEWIC 2011). Continued efforts for conservation of valley bottom habitats in the southern interior are needed for this and other riparian-dependent species.