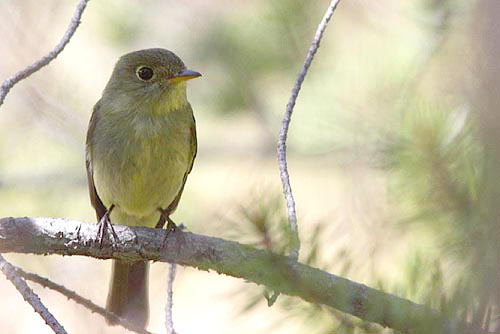 Characteristics and Range The Yellow-bellied Flycatcher is one of the two species of Empidonax in British Columbia with strongly yellowish underparts, the other one being the Pacific-slope Flycatcher. It is a characteristic species of the Boreal Forest, breeding from the eastern slopes of the Pacific coastal mountain ranges to the Atlantic Coast and south to the northern Great Lakes. It is a medium-distance migrant that winters from Mexico south to Panama.

Distribution, Abundance, and Habitat Previously thought to be very thinly distributed in northern and central British Columbia (Campbell et al. 1997), the Atlas shows the Yellow-bellied Flycatcher to be widespread in this area. There are suggestions of a recent southward range expansion in central British Columbia, with records from the Nechako Plateau area and from Mount Robson Park south to Kinbasket Lake, although specimens had been collected from a little farther north in the Bowron Lakes area as long ago as 1929 (Dickinson 1953). This species is probably even more widespread than shown by the Atlas, because it is inconspicuous and often prefers less accessible boggy habitats.

The Yellow-bellied Flycatcher uses a variety of habitats, including older, shady spruce forests, dense stands of young coniferous or broad-leaved trees and thickets dominated by spruce (Picea), willow (Salix), alder (Alnus), birch (Betula), and even aspen (Populus), as well as mixed stands. It often inhabits areas in or on the edges of boreal bogs, especially east of the Rocky Mountains, but upland forest stands are also used, including young Lodgepole Pine (Pinus contorta) forests farther west. One relatively common feature of habitats used is a dense carpet of moss.

Conservation and Recommendations There appear to be no conservation concerns for this species. There are not enough Breeding Bird Survey data for British Columbia to show meaningful trends (there are too few survey routes), but continent-wide data show an apparently stable population over the past five decades (Sauer et al. 2014).