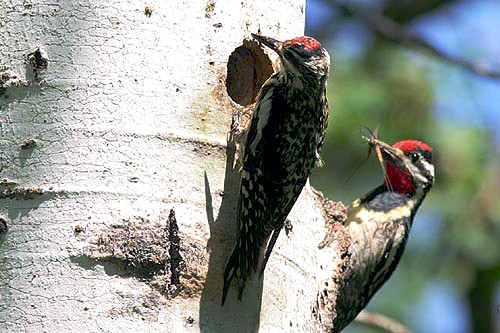 Characteristics and Range The Yellow-bellied Sapsucker is one of four sapsuckers, species of woodpecker that regularly drill holes through bark to feed on tree sap. Sapsuckers maintain and defend extensive systems of sap wells, which other species such as hummingbirds feed from. Until 1983, three of the four sapsuckers, Red-breasted, Red-naped and Yellow-bellied, were considered the same species. They are in fact three closely related species, which prior to the Pleistocene (last Ice Age) were probably a single widespread species whose populations became separated as ice sheets advanced southwards. Those populations evolved into distinct species that have come back into contact with each other since the ice retreated. The Yellow-bellied is the most migratory and easterly distributed of the three, breeding across the Boreal Forest from Alaska to the Atlantic Coast, and wintering in the Southern Coastal Plain, the Caribbean, and Central America (Walters et al. 2002).

Distribution, Abundance, and Habitat It is widespread east of the Rocky Mountains in north-east British Columbia, and more sparsely distributed across northern British Columbia. The Atlas extended the breeding range significantly southwest since The Birds of British Columbia was published in 1990, and filled many distribution gaps. Breeding occurs as far southwest as the Nechako Plateau and the upper Skeena River drainage, and as far northwest as Atlin Lake. Increased survey coverage partly explains the change, but an actual southwestern expansion may have occurred over the past two decades, supported by a distinct flow of Yellow-bellied Sapsucker genes within hybrid sapsuckers as far west as Francois Lake (Seneviratne et al. 2012)

The extensive areas of high Probability of Observation for the Yellow-bellied Sapsucker are in the Peace, Fort Nelson and Liard river lowlands in the Boreal and Taiga Plains ecoprovinces. Point counts show highest abundance in the White and Black Spruce biogeoclimatic zone that dominates this region, between 250 and 750 m, confirming that this is the centre of the provincial population. Point counts also showed that it is very common in the Sub-boreal Spruce biogeoclimatic zone, where the hybrid zone with Red-breasted Sapsucker is centred.

Conservation and Recommendations There are no management concerns for the species, which is stable across its breeding range (Environment Canada 2011). Its preference for early seral stage habitats means that it is well-adapted to regenerating cut-over forests, and forest harvest regimes will likely supply adequate breeding habitat over the long term. Projected drying climate change scenarios (Hamann and Wang 2006) could facilitate its movement into interior forests. These changes in landscape may enable the more aggressive Yellow-bellied Sapsucker to outcompete the Red-breasted Sapsucker where they overlap (Seneviratne et al. 2012). The hybrid zones of the trio of sapsuckers provide useful markers in predicting forest birds' responses to changes in climate and forest cover (Seneviratne et al. 2016).