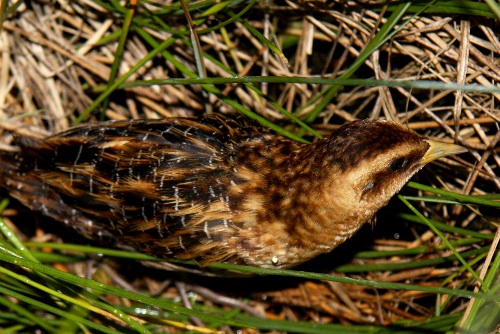 Characteristics and Range This small, secretive marsh bird is rarely seen, but imitation of the male's distinctive "tic-tic, tic-tic-tic" call will occasionally bring a response. The Yellow Rail breeds locally across a broad range spanning the central Boreal Forest, Great Lakes and northern Prairie regiona, from the Atlantic Coast to the Rocky Mountain foothills (Bookhout 1995). Northeastern British Columbia is near the northwestern limit of its breeding range, but some birds are known to breed west of the Rockies. The species winters in the Southern Coastal Plain region of the southeastern United States.

Distribution, Abundance, and Habitat Atlas reports of the Yellow Rail were largely confined to the Boreal Plains Ecoprovince, with single isolated site records from the Southern Rocky Mountain Trench and Chilcotin Plateau respectively. The species was probably not well-sampled by atlassing efforts, owing to its secretive nature, nocturnal habits, and generally remote breeding habitat. Nevertheless, the Atlas has significantly improved our understanding of Yellow Rail distribution in the province, since it was previously described as "hypothetical" by Campbell et al. (1990), with a postscript of one record from the Boreal Plains. Increased observer effort seems the most probable explanation for the change in known distribution, and additional effort may reveal more surprises in the future.

The majority of the 13 squares where the species was recorded had only one general location where rails were found, but most of these locations had multiple records (within and between years). Thus, based on the current knowledge of distribution, the total population of Yellow Rail breeding in the province is quite small; probably fewer than 100 pairs.

The Yellow Rail seems to have fairly particular requirements for breeding habitat. It prefers open, sedge (Carex species)-dominated marshes with little or no standing water. Annual fluctuations in water level can influence whether a particular marsh is occupied; larger marshes tend to be occupied more consistently, possibly because territories can be shifted to account for current conditions.

Conservation and Recommendations Atlas data resulted in a reduced provincial risk status from critically imperiled to imperiled. Yellow Rail's COSEWIC Special Concern listing is due to a relatively small population size, compressed wintering range, ongoing threats to breeding and wintering wetland habitats, and evidence for local declines in several parts of its breeding range (COSEWIC 2009). Many of the consistently occupied marshes in British Columbia are potentially under threat from draining, flooding, cattle trampling, and oil and gas development. Yellow Rail is also listed as a 'Category of Species at Risk' under the British Columbia Forest and Range Practices Act and the Oil and Gas Activities Act. This latter designation allows areas of important habitat to be protected from forestry and oil and gas industrial activity. No protection has been enacted to date.

Additional surveys in potential breeding habitat, particularly in northeastern British Columbia, will help determine the true range of the species in the province and will contribute to a better understanding of population size for the species across Canada. Consistently occupied wetlands in British Columbia should be protected where possible.